On the Progenitors of Galactic Novae

Of the approximately 400 known Galactic classical novae, only 10 of them, the recurrent novae, have been seen to erupt more than once. At least eight of these recurrents are known to harbor evolved secondary stars, rather than the main-sequence secondaries typical in classical novae. In this paper, we propose a new nova classification system, based solely on the evolutionary state of the secondary and not (like the current schemes) based on the properties of the outbursts. Using archival optical and near-infrared photometric observations of a sample of 38 quiescent Galactic novae we show that the evolutionary state of the secondary star in a quiescent system can be predicted and several objects are identified for follow-up observations: CI Aql, V2487 Oph, DI Lac, and EU Sct. 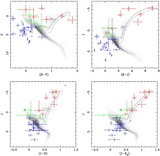