We describe the automated spectral classification, redshift determination, and parameter measurement pipeline in use for the Baryon Oscillation Spectroscopic Survey (BOSS) of the Sloan Digital Sky Survey III (SDSS-III) as of the survey's ninth data release (DR9), encompassing 831,000 moderate-resolution optical spectra. We give a review of the algorithms employed, and describe the changes to the pipeline that have been implemented for BOSS relative to previous SDSS-I/II versions, including new sets of stellar, galaxy, and quasar redshift templates. For the color-selected "CMASS" sample of massive galaxies at redshift 0.4 <~ z <~ 0.8 targeted by BOSS for the purposes of large-scale cosmological measurements, the pipeline achieves an automated classification success rate of 98.7% and confirms 95.4% of unique CMASS targets as galaxies (with the balance being mostly M stars). Based on visual inspections of a subset of BOSS galaxies, we find that approximately 0.2% of confidently reported CMASS sample classifications and redshifts are incorrect, and about 0.4% of all CMASS spectra are objects unclassified by the current algorithm which are potentially recoverable. The BOSS pipeline confirms that ~51.5% of the quasar targets have quasar spectra, with the balance mainly consisting of stars and low signal-to-noise spectra. Statistical (as opposed to systematic) redshift errors propagated from photon noise are typically a few tens of km s-1 for both galaxies and quasars, with a significant tail to a few hundreds of km s-1 for quasars. We test the accuracy of these statistical redshift error estimates using repeat observations, finding them underestimated by a factor of 1.19-1.34 for galaxies and by a factor of two for quasars. We assess the impact of sky-subtraction quality, signal-to-noise ratio, and other factors on galaxy redshift success. Finally, we document known issues with the BOSS DR9 spectroscopic data set and describe directions of ongoing development. 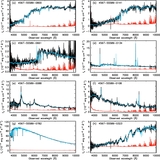