We are continuing a J, K and narrowband imaging survey of 300 deg2 of the plane of the Galaxy, searching for new Wolf-Rayet (W-R) stars. Our survey spans 150° in Galactic longitude and reaches 1° above and below the Galactic plane. The survey has a useful limiting magnitude of K = 15 over most of the observed Galactic plane, and K = 14 (due to severe crowding) within a few degrees of the Galactic center. Thousands of emission-line candidates have been detected. In spectrographic follow-ups of 146 relatively bright W-R star candidates, we have re-examined 11 previously known WC and WN stars and discovered 71 new W-R stars, 17 of type WN and 54 of type WC. Our latest image analysis pipeline now picks out W-R stars with a 57% success rate. Star subtype assignments have been confirmed with the K-band spectra and distances approximated using the method of spectroscopic parallax. Some of the new W-R stars are among the most distant known in our Galaxy. The distribution of these new W-R stars is beginning to trace the locations of massive stars along the distant spiral arms of the Milky Way. 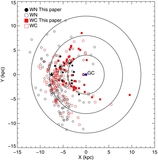