The results of 2490 intensified CCD observations of double stars, made with the 26 inch refractor of the U.S. Naval Observatory, are presented. Each observation of a system represents a combination of over 2000 short-exposure images. These observations are averaged into 1462 mean relative positions and range in separation from 0farcs56 to 71farcs80, with a mean separation of 14farcs81. This is the 18th in this series of papers and covers the period 2011 January 3 through 2011 December 18. Also presented are four pairs which are resolved for the first time, thirteen other pairs which appear to be lost, and linear elements for four additional pairs. 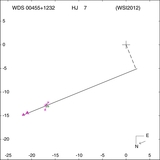