The Sun was Not Born in M67

Using the most recent proper-motion determination of the old, solar-metallicity, Galactic open cluster M67 in orbital computations in a non-axisymmetric model of the Milky Way, including a bar and three-dimensional spiral arms, we explore the possibility that the Sun once belonged to this cluster. We have performed Monte Carlo numerical simulations to generate the present-day orbital conditions of the Sun and M67, and all the parameters in the Galactic model. We compute 3.5 × 105 pairs of orbits Sun-M67 looking for close encounters in the past with a minimum distance approach within the tidal radius of M67. In these encounters we find that the relative velocity between the Sun and M67 is larger than 20 km s-1. If the Sun had been ejected from M67 with this high velocity by means of a three-body encounter, this interaction would have either destroyed an initial circumstellar disk around the Sun or dispersed its already formed planets. We also find a very low probability, much lower than 10-7, that the Sun was ejected from M67 by an encounter of this cluster with a giant molecular cloud. This study also excludes the possibility that the Sun and M67 were born in the same molecular cloud. Our dynamical results convincingly demonstrate that M67 could not have been the birth cluster of our solar system.

This work relies partly on observations of the Large Binocular Telescope (LBT). The LBT is an international collaboration among institutions in the United States, Italy, and Germany. LBT Corporation partners are The Ohio State University; The University of Arizona on behalf of the Arizona university system; Istituto Nazionale di Astrofisica, Italy; LBT Beteiligungsgesellschaft, Germany, representing the Max-Planck Society, the Astrophysical Institute Potsdam, and Heidelberg University; and The Research Corporation, on behalf of The University of Notre Dame, University of Minnesota, and University of Virginia. 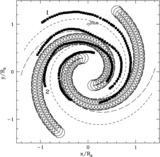