The large relative sizes of circumstellar and circumplanetary disks imply that they might be seen in eclipse in stellar light curves. We estimate that a survey of ~104 young (~10 million year old) post-accretion pre-main-sequence stars monitored for ~10 years should yield at least a few deep eclipses from circumplanetary disks and disks surrounding low-mass companion stars. We present photometric and spectroscopic data for a pre-main-sequence K5 star (1SWASP J140747.93-394542.6 = ASAS J140748-3945.7), a newly discovered ~0.9 M ⊙ member of the ~16 Myr old Upper Centaurus-Lupus subgroup of Sco-Cen at a kinematic distance of 128 ± 13 pc. This star exhibited a remarkably long, deep, and complex eclipse event centered on 2007 April 29 (as discovered in Super Wide Angle Search for Planets (SuperWASP) photometry, and with portions of the dimming confirmed by All Sky Automated Survey (ASAS) data). At least five multi-day dimming events of >0.5 mag are identified, with a >3.3 mag deep eclipse bracketed by two pairs of ~1 mag eclipses symmetrically occurring ±12 days and ±26 days before and after. Hence, significant dimming of the star was taking place on and off over at least a ~54 day period in 2007, and a strong >1 mag dimming event occurring over a ~12 day span. We place a firm lower limit on the period of 850 days (i.e., the orbital radius of the eclipser must be >1.7 AU and orbital velocity must be <22 km s-1). The shape of the light curve is similar to the lopsided eclipses of the Be star EE Cep. We suspect that this new star is being eclipsed by a low-mass object orbited by a dense inner disk, further girded by at least three dusty rings of optical depths near unity. Between these rings are at least two annuli of near-zero optical depth (i.e., gaps), possibly cleared out by planets or moons, depending on the nature of the secondary. For possible periods in the range 2.33-200 yr, the estimated total ring mass is ~8-0.4 M Moon (if the rings have optical opacity similar to Saturn's rings), and the edge of the outermost detected ring has orbital radius ~0.4-0.09 AU. In the new era of time-domain astronomy opened by surveys like SuperWASP, ASAS, etc., and soon to be revolutionized by Large Synoptic Survey Telescope, discovering and characterizing eclipses by circumplanetary and circumsecondary disks will provide us with observational constraints on the conditions that spawn satellite systems around gas giant planets and planetary systems around stars. 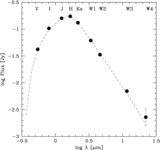