We have made an extensive survey of emission-line stars in the IC 1396 H II region to investigate the low-mass population of pre-main-sequence (PMS) stars. A total of 639 Hα emission-line stars were detected in an area of 4.2 deg2 and their i' photometry was measured. Their spatial distribution exhibits several aggregates near the elephant trunk globule (Rim A) and bright-rimmed clouds at the edge of the H II region (Rim B and SFO 37, 38, 39, 41), and near HD 206267, which is the main exciting star of the H II region. Based on the extinction estimated from the near-infrared color-color diagram, we have selected PMS star candidates associated with IC 1396. The age and mass were derived from the extinction-corrected color-magnitude diagram and theoretical PMS tracks. Most of our PMS candidates have ages of <3 Myr and masses of 0.2-0.6 M ⊙. Although it appears that only a few stars were formed in the last 1 Myr in the east region of the exciting star, the age difference among subregions in our surveyed area is not clear from the statistical test. Our results may suggest that massive stars were born after the continuous formation of low-mass stars for 10 Myr. The birth of the exciting star could be the late stage of slow but contiguous star formation in the natal molecular cloud. It may have triggered the formation of many low-mass stars at the dense inhomogeneity in and around the H II region by a radiation-driven implosion. 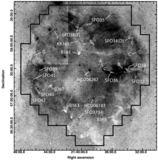