Debris disks have been found primarily around intermediate and solar mass stars (spectral types A-K) but rarely around low mass M-type stars. We have spatially resolved a debris disk around the remarkable M3-type star GJ 581 hosting multiple planets using deep PACS images at 70, 100 and 160 μm as part of the DEBRIS Program on the Herschel Space Observatory. This is the second spatially resolved debris disk found around an M-type star, after the one surrounding the young star AU Mic (12 Myr). However, GJ 581 is much older (2-8 Gyr), and is X-ray quiet in the ROSAT data. We fit an axisymmetric model of the disk to the three PACS images and found that the best fit model is for a disk extending radially from 25 ± 12 AU to more than 60 AU. Such a cold disk is reminiscent of the Kuiper belt but it surrounds a low mass star (0.3 M☉) and its fractional dust luminosity Ldust/L∗ of ~ 10-4 is much higher. The inclination limits of the disk found in our analysis make the masses of the planets small enough to ensure the long-term stability of the system according to some dynamical simulations. The disk is collisionally dominated down to submicron-sized grains and the dust cannot be expelled from the system by radiation or wind pressures because of the low luminosity and low X-ray luminosity of GJ 581. We suggest that the correlation between low-mass planets and debris disks recently found for G-type stars also applies to M-type stars. Finally, the known planets, of low masses and orbiting within 0.3 AU from the star, cannot dynamically perturb the disk over the age of the star, suggesting that an additional planet exists at larger distance that is stirring the disk to replenish the dust.

Herschel in an ESA space observatory with science instruments provided by European-led Principal Investigator consortia and with important participation by NASA. 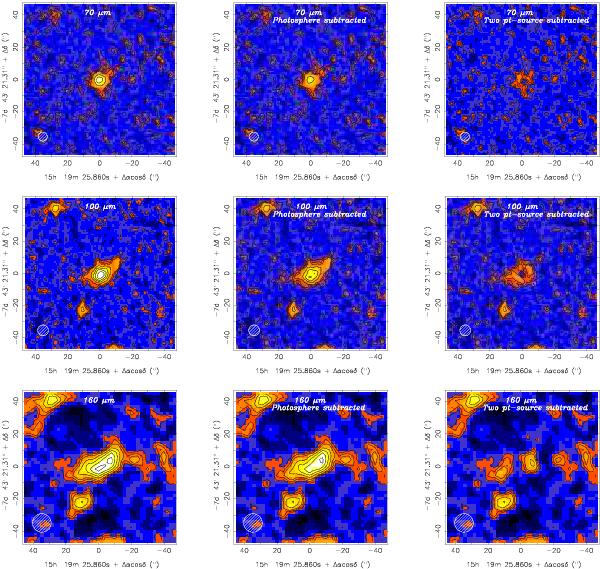