The Earliest Phases of Star formation (EPoS) observed with Herschel: the dust temperature and density distributions of B68

Context. Isolated starless cores within molecular clouds can be used as a testbed to investigate the conditions prior to the onset of fragmentation and gravitational proto-stellar collapse.
Aims: We aim to determine the distribution of the dust temperature and the density of the starless core B68.
Methods: In the framework of the Herschel guaranteed-time key programme "The Earliest Phases of Star formation" (EPoS), we have imaged B68 between 100 and 500 μm. Ancillary data at (sub)millimetre wavelengths, spectral line maps of the 12CO (2-1), and 13CO (2-1) transitions, as well as an NIR extinction map were added to the analysis. We employed a ray-tracing algorithm to derive the 2D mid-plane dust temperature and volume density distribution without suffering from the line-of-sight averaging effects of simple SED fitting procedures. Additional 3D radiative transfer calculations were employed to investigate the connection between the external irradiation and the peculiar crescent-shaped morphology found in the FIR maps.
Results: For the first time, we spatially resolve the dust temperature and density distribution of B68, convolved to a beam size of 36.″4. We find a temperature gradient dropping from (16.7-1.0+1.3) K at the edge to (8.2-0.7+2.1) K in the centre, which is about 4 K lower than the result of the simple SED fitting approach. The column density peaks at NH = (4.3-2.8+1.4) × 1022 cm-2, and the central volume density was determined to nH = (3.4-2.5+0.9) × 105 cm-3. B68 has a mass of 3.1 M⊙ of material with AK > 0.2 mag for an assumed distance of 150 pc. We detect a compact source in the southeastern trunk, which is also seen in extinction and CO. At 100 and 160 μm, we observe a crescent of enhanced emission to the south.
Conclusions: The dust temperature profile of B68 agrees well with previous estimates. We find the radial density distribution from the edge of the inner plateau outward to be nH ∝ r-3.5. Such a steep profile can arise from either or both of the following: external irradiation with a significant UV contribution or the fragmentation of filamentary structures. Our 3D radiative transfer model of an externally irradiated core by an anisotropic ISRF reproduces the crescent morphology seen at 100 and 160 μm. Our CO observations show that B68 is part of a chain of globules in both space and velocity, which may indicate that it was once part of a filament that dispersed. We also resolve a new compact source in the southeastern trunk and find that it is slightly shifted in centroid velocity from B68, lending qualitative support to core collision scenarios.

Herschel is an ESA space observatory with science instruments provided by European-led Principal Investigator consortia and with important participation from NASA.Partially based on observations collected at the European Organisation for Astronomical Research in the Southern Hemisphere, Chile, as part of the observing programme 78.F-9012.Appendices are available in electronic form at http://www.aanda.org 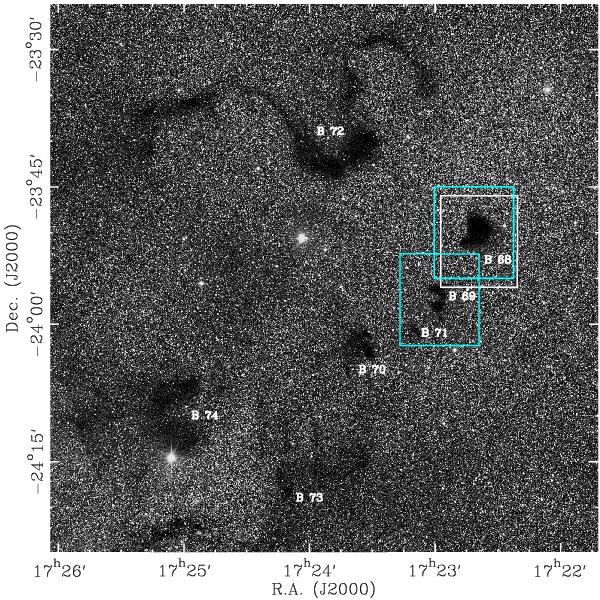