The long-period (P = 27.1 years) peculiar eclipsing binary ∊ Aur, which has recently completed its two year-long primary eclipse, has perplexed astronomers for over a century. The eclipse arises from the transit of a huge, cool and opaque, disk across the face of the F0 Iab star. One of the principal problems with understanding this binary is that the very small parallax of p = (1.53 ± 1.29) mas, implying a distance range of d ~ (0.4-4.0) kpc, returned by a revised reduction of the Hipparcos satellite observations, is so uncertain that it precludes a trustworthy estimate of the luminosities and masses of the binary components. A reliable distance determination would help solve the nature of this binary and distinguish between competing models. A new approach is discussed here: we estimate the distance to ∊ Aur from the calibration of reddening and interstellar-medium gas absorption in the direction of the system. The distance to ∊ Aur is estimated from its measured E(B - V) and the strength of the diffuse interstellar band 6613.56 Å. Spectroscopy and UBV photometry of several B- and A-type stars (<1° of ∊ Aur) were carried out. The distances of the reference stars were estimated from either measured or spectroscopic parallaxes. The range in distances of the reference stars is from 0.2 to 3.0 kpc. We find reasonably tight relations among E(B - V), EW, and Ic (6613 Å feature) with distance. From these calibrations, a distance of d = (1.5 ± 0.5) kpc is indicated for ∊ Aur. If ∊ Aur is indeed at (or near) this distance, its inferred absolute visual magnitude of MV ≃ (- 9.1 ± 1.1) mag for the F-supergiant indicates that it is a very young, luminous and massive star. Noteworthy, the high luminosity inferred here is well above the maximum value of MV ≃ -6.2 m expected for (less-massive) post asymptotic giant branch supergiant stars. Thus, based on the circumstantial evidence, the higher-mass model appears to best explain the properties of this mysterious binary system. As a by-product of this study, our spectroscopy led to the finding that two of the stars used in the distance calibrations, HD 31617 and HD 31894, are newly discovered spectroscopic binaries, and HD 32328 is a new radial-velocity variable.

Based on new spectral and photometric observations from the Hvar, Ondřejov and Tautenburg Observatories, the Four College Automatic Photoelectric Telescope and from the ESA Hipparcos satellite.Appendices are available in electronic form at http://www.aanda.org 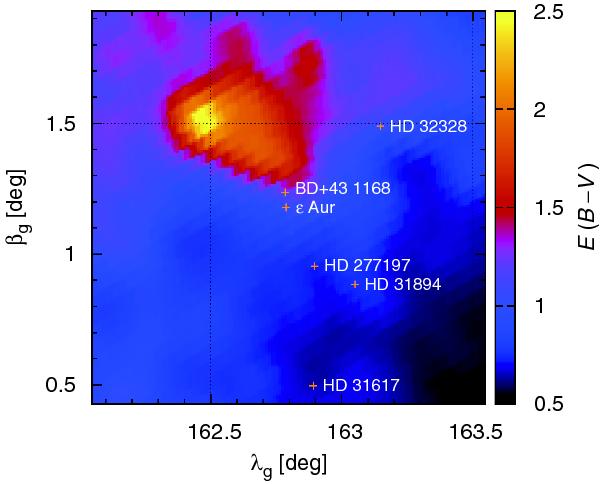