We present an update of the visible and near-infrared colour database of Minor Bodies in the Outer Solar System (MBOSSes), which now includes over 2000 measurement epochs of 555 objects, extracted from over 100 articles. The list is fairly complete as of December 2011. The database is now large enough to enable any dataset with a large dispersion to be safely identified and rejected from the analysis. The selection method used is quite insensitive to individual outliers. Most of the rejected datasets were observed during the early days of MBOSS photometry. The individual measurements are combined in a way that avoids possible rotational artifacts. The spectral gradient over the visible range is derived from the colours, as well as the R absolute magnitude M(1,1). The average colours, absolute magnitude, and spectral gradient are listed for each object, as well as the physico-dynamical classes using a classification adapted from Gladman and collaborators. Colour-colour diagrams, histograms, and various other plots are presented to illustrate and investigate class characteristics and trends with other parameters, whose significances are evaluated using standard statistical tests. Except for a small discrepancy for the J-H colour, the largest objects, with M(1,1) < 5, are indistinguishable from the smaller ones. The larger ones are slightly bluer than the smaller ones in J-H. Short-period comets, Plutinos and other resonant objects, hot classical disk objects, scattered disk objects and detached disk objects have similar properties in the visible, while the cold classical disk objects and the Jupiter Trojans form two separate groups of their spectral properties in the visible wavelength range. The well-known colour bimodality of Centaurs is confirmed. The hot classical disk objects with large inclinations, or large orbital excitations are found to be bluer than the others, confirming a previously known result. Additionally, the hot classical disk objects with a smaller perihelion distance are bluer than those that do not come as close to the Sun. The bluer hot classical disk objects and resonant objects have fainter absolute magnitudes than the redder ones of the same class. Finally, we discuss possible scenarios for the origin of the colour diversity observed in MBOSSes, i.e. colouration caused by evolutionary or formation processes. The colour tables and all plots are also available on the MBOSS colour web page, which will be updated when new measurements are published 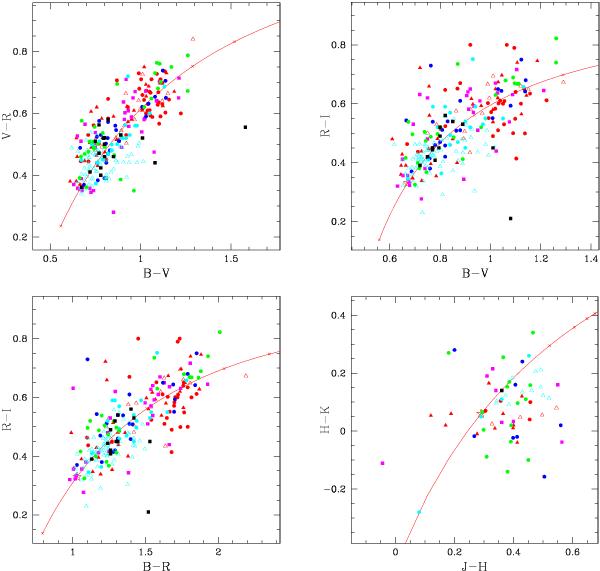