Aims: Stellar mass distribution in the Andromeda galaxy (M 31) is estimated using optical and near-infrared imaging data. Combining the derived stellar mass model with various kinematical data, properties of the dark matter (DM) halo of the galaxy are constrained.
Methods: SDSS observations through the ugriz filters and the Spitzer imaging at 3.6 microns are used to sample the spectral energy distribution (SED) of the galaxy at each imaging pixel. Intrinsic dust extinction effects are taken into account by using far-infrared observations. Synthetic SEDs created with different stellar population synthesis models are fitted to the observed SEDs, providing estimates for the stellar mass surface density at each pixel. The stellar mass distribution of the galaxy is described with a 3-dimensional model consisting of a nucleus, a bulge, a disc, a young disc and a halo component, each following the Einasto density distribution (relations between different functional forms of the Einasto density distribution are given in Appendix B). By comparing the stellar mass distribution to the observed rotation curve and kinematics of outer globular clusters and satellite galaxies, the DM halo parameters are estimated.
Results: Stellar population synthesis models suggest that M 31 is dominated by old (≳7 Gyr) stars throughout the galaxy, with the lower limit for the stellar mass-to-light ratios M/Lr ≳ 4 M⊙/L⊙. The upper limit M/Lr ≲ 6 M⊙/L⊙ is given by the rotation curve of the galaxy. The total stellar mass is (10-15) × 1010 M⊙, 30% of which is in the bulge and 56% in the disc. None of the tested DM distribution models (Einasto, NFW, Moore, Burkert) can be falsified on the basis of the stellar matter distribution and the rotation curve of the galaxy. The virial mass M200 of the DM halo is (0.8-1.1) × 1012 M⊙ and the virial radius is R200 = 189-213 kpc, depending on the DM distribution. For the Einasto profile, the average density of the DM halo within the central 10 pc is 16-61 M⊙ pc-3 (0.6-2.3 TeV/c2 cm-3), depending on the stellar mass model. The central density of the DM halo is comparable to that of nearby dwarf galaxies, low-surface-brightness galaxies and distant massive disc galaxies, thus the evolution of central DM halo properties seems to be regulated by similar processes for a broad range of halo masses, environments, and cosmological epochs. 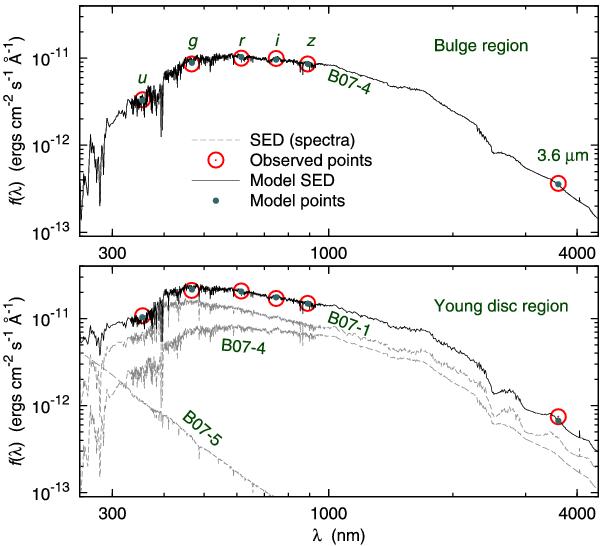