A hydrodynamic study of the circumstellar envelope of

Context. Both the absolute mass-loss rates and the mechanisms that drive the mass loss of late-type supergiants are still not well known. Binaries such as α Sco provide the most detailed empirical information about the winds of these stars.
Aims: Our goal was to improve the binary technique for the determination of the mass-loss rate of by including a realistic density distribution and velocity field from hydrodynamic and plasma simulations.
Methods: We performed 3D hydrodynamic simulations of the circumstellar envelope of α Sco in combination with plasma simulations accounting for the heating, ionization, and excitation of the wind by the radiation of . These simulations served as the basis for an examination of circumstellar absorption lines in the spectrum of α Sco B as well as of emission lines from the .
Results: The present model of the extended envelope of α Sco reproduces some of the structures that were observed in the circumstellar absorption lines in the spectrum of α Sco B. Our theoretical density and velocity distributions of the outflow deviate considerably from a spherically expanding model, which was used in previous studies. This results in a higher mass-loss rate of (2 ± 0.5) × 10-6 M⊙ yr-1. The hot H ii region around the secondary star induces an additional acceleration of the wind at large distances from the primary, which is seen in absorption lines of Ti ii and Cr ii at -30 km s-1.

Based on observations collected at the European Organisation for Astronomical Research in the Southern Hemisphere, Chile, under program ID 076.D-0690(A), and on observations made with the NASA/ESA Hubble Space Telescope (program # 5952), obtained at the Space Telescope Science Institute, which is operated by the Association of Universities for Research in Astronomy, Inc., under NASA contract NAS 5-26555. 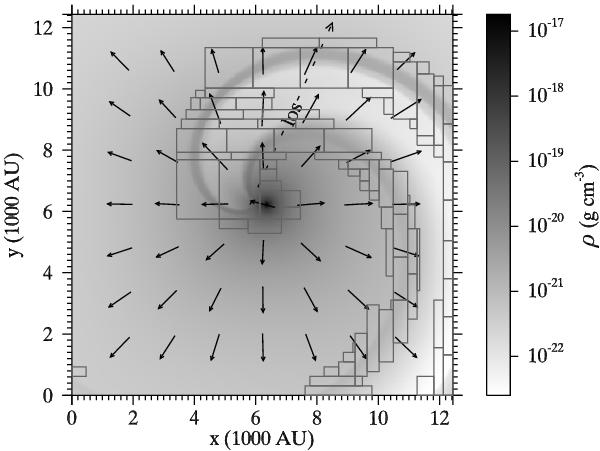