Context. The Kepler object KIC 12557548 b is peculiar. It exhibits transit-like features every 15.7 h that vary in depth between 0.2% and 1.2%. Rappaport et al. (2012, ApJ, 752, 1) explain the observations in terms of a disintegrating, rocky planet that has a trailing cloud of dust created and constantly replenished by thermal surface erosion. The variability of the transit depth is then a consequence of changes in the cloud optical depth.
Aims: We aim to validate the disintegrating-planet scenario by modeling the detailed shape of the observed light curve, and thereby constrain the cloud particle properties to better understand the nature of this intriguing object.
Methods: We analyzed the six publicly-available quarters of raw Kepler data, phase-folded the light curve and fitted it to a model for the trailing dust cloud. Constraints on the particle properties were investigated with a light-scattering code.
Results: The light curve exhibits clear signatures of light scattering and absorption by dust, including a brightening in flux just before ingress correlated with the transit depth and explained by forward scattering, and an asymmetry in the transit light curve shape, which is easily reproduced by an exponentially decaying distribution of optically thin dust, with a typical grain size of 0.1 μm.
Conclusions: Our quantitative analysis supports the hypothesis that the transit signal of KIC 12557548 b is due to a variable cloud of dust, most likely originating from a disintegrating object. 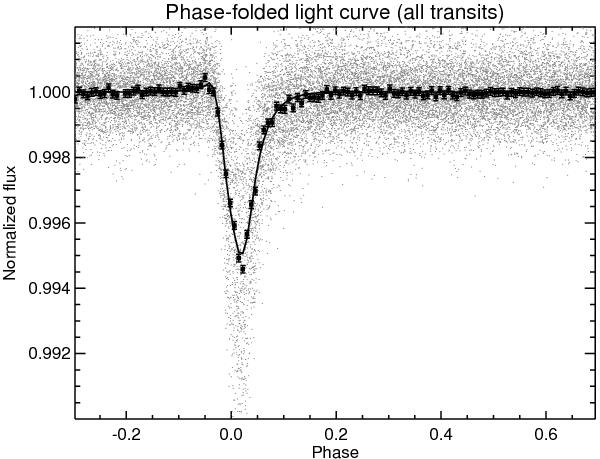