Context. We performed a uniform and detailed abundance analysis of 12 refractory elements (Na, Mg, Al, Si, Ca, Ti, Cr, Ni, Co, Sc, Mn, and V) for a sample of 1111 FGK dwarf stars from the HARPS GTO planet search program. Of these stars, 109 are known to harbor giant planetary companions and 26 stars are exclusively hosting Neptunians and super-Earths.
Aims: The two main goals of this paper are to investigate whether there are any differences between the elemental abundance trends for stars of different stellar populations and to characterize the planet host and non-host samples in terms of their [X/H]. The extensive study of this sample, focused on the abundance differences between stars with and without planets will be presented in a parallel paper.
Methods: The equivalent widths of spectral lines were automatically measured from HARPS spectra with the ARES code. The abundances of the chemical elements were determined using an LTE abundance analysis relative to the Sun, with the 2010 revised version of the spectral synthesis code MOOG and a grid of Kurucz ATLAS9 atmospheres. To separate the Galactic stellar populations we applied both a purely kinematical approach and a chemical method.
Results: We found that the chemically separated (based on the Mg, Si, and Ti abundances) thin- and thick disks are also chemically disjunct for Al, Sc, Co, and Ca. Some bifurcation might also exist for Na, V, Ni, and Mn, but there is no clear boundary of their [X/Fe] ratios. We confirm that an overabundance in giant-planet host stars is clear for all studied elements.We also confirm that stars hosting only Neptunian-like planets may be easier to detect around stars with similar metallicities than around non-planet hosts, although for some elements (particulary α-elements) the lower limit of [X/H] is very abrupt. 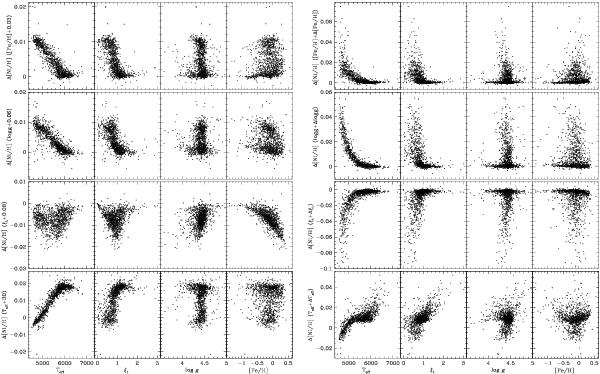