On the incidence of weak magnetic fields in DA white dwarfs

Context. About 10% of white dwarfs have magnetic fields with strength in the range between about 105 and 5 × 108 G. It is not known whether the remaining white dwarfs are not magnetic, or if they have magnetic fields too weak to be detected with the techniques adopted in the large surveys. Information is particularly lacking for the cooler (and generally fainter) white dwarfs.
Aims: We describe the results of the first survey specifically devised to clarify the detection frequency of kG-level magnetic fields in cool DA white dwarfs.
Methods: Using the FORS1 instrument of the ESO VLT, we have obtained Balmer line circular spectropolarimetric measurements of a small sample of cool (DA6 - DA8) white dwarfs. Using FORS and UVES archive data, we have also revised numerous white dwarf field measurements previously published in the literature.
Results: We have discovered an apparently constant longitudinal magnetic field of ~9.5 kG in the DA6 white dwarf . This star is the first weak-field white dwarf that has been observed sufficiently to roughly determine the characteristics of its field. The available data are consistent with a simple dipolar morphology with magnetic axis nearly parallel to the rotation axis, and a polar strength of ≃ 56 kG. Our re-evaluation of the FORS archive data for white dwarfs indicates that longitudinal magnetic fields weaker than 10 kG have previously been correctly identified in at least three white dwarfs. However, for one of these three weak-field stars (), UVES archive data show a ~100 kG mean field modulus. Either at the time of the FORS observations the star's magnetic field axis was nearly perpendicular to the line of sight, or the star's magnetic field has rather complex structure.
Conclusions: We find that the probability of detecting a field of kG strength in a DA white dwarf is of the order of 10% for each of the cool and hot DA stars. If there is a lower cutoff to field strength in white dwarfs, or a field below which all white dwarfs are magnetic, the current precision of measurements is not yet sufficient to reveal it.

Based on observations collected at the European Organisation for Astronomical Research in the Southern Hemisphere, Chile, under observing programme 073.D-0516, and obtained from the ESO/ST-ECF Science Archive Facility.Table 3 is available in electronic form at http://www.aanda.org 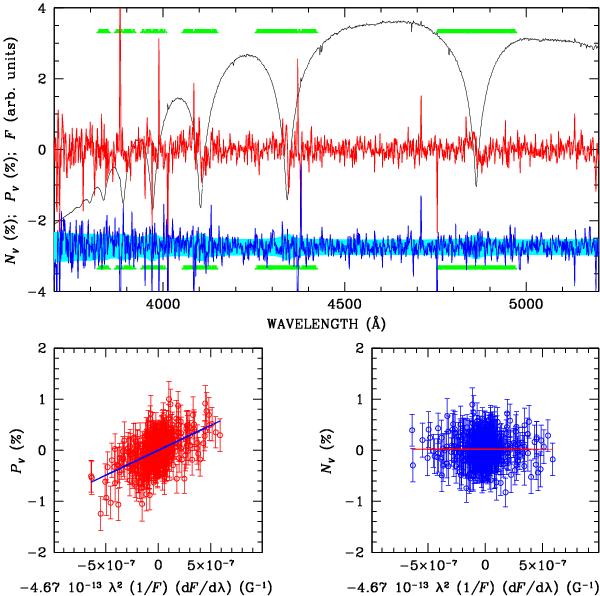