Understanding the white-light flare on 2012 March 9: evidence of a two-step magnetic reconnection


Aims: We attempt to understand the white-light flare (WLF) that was observed on 2012 March 9 with a newly constructed multi-wavelength solar telescope called the Optical and Near-infrared Solar Eruption Tracer (ONSET).
Methods: We analyzed WLF observations in radio, Hα, white-light, ultraviolet, and X-ray bands. We also studied the magnetic configuration of the flare via the nonlinear force-free field (NLFFF) extrapolation and the vector magnetic field observed by the Helioseismic and Magnetic Imager (HMI) on board the Solar Dynamics Observatory (SDO).
Results: Continuum emission enhancement clearly appeared at the 3600 Å and 4250 Å bands, with peak contrasts of 25% and 12%, respectively. The continuum emission enhancement closely coincided with the impulsive increase in the hard X-ray emission and a microwave type III burst at 03:40 UT. We find that the WLF appeared at one end of either the sheared or twisted field lines or both. There was also a long-lasting phase in the Hα and soft X-ray bands after the white-light emission peak. In particular, a second, yet stronger, peak appeared at 03:56 UT in the microwave band.
Conclusions: This event shows clear evidence that the white-light emission was caused by energetic particles bombarding the lower solar atmosphere. A two-step magnetic reconnection scenario is proposed to explain the entire process of flare evolution, i.e., the first-step magnetic reconnection between the field lines that are highly sheared or twisted or both, and the second-step one in the current sheet, which is stretched by the erupting flux rope. The WLF is supposed to be triggered in the first-step magnetic reconnection at a relatively low altitude. 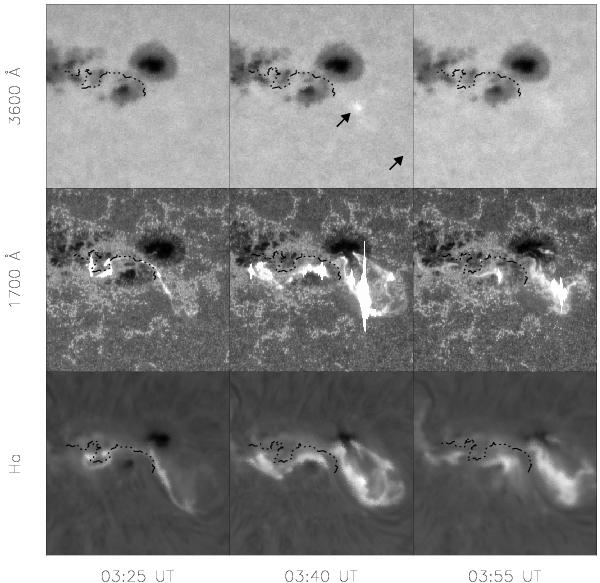