Context. From a dynamical analysis of the orbital elements of trans-Neptunian objects (TNOs), Ragozzine & Brown (2007, AJ, 134, 2160) reported a list of candidate members of the first collisional family found among this population, associated with (136 108) Haumea (a.k.a. 2003 EL61).
Aims: We aim to distinguish the true members of the Haumea collisional family from interlopers. We search for water ice on their surfaces, which is a common characteristic of the known family members. The properties of the confirmed family are used to constrain the formation mechanism of Haumea, its satellites, and its family.
Methods: Optical and near-infrared photometry is used to identify water ice. We use in particular the CH4 filter of the Hawk-I instrument at the European Southern Observatory Very Large Telescope as a short H-band (HS), the (J - HS) colour being a sensitive measure of the water ice absorption band at 1.6 μm.
Results: Continuing our previous study headed by Snodgrass, we report colours for 8 candidate family members, including near-infrared colours for 5. We confirm one object as a genuine member of the collisional family (2003 UZ117), and reject 5 others. The lack of infrared data for the two remaining objects prevent any conclusion from being drawn. The total number of rejected members is therefore 17. The 11 confirmed members represent only a third of the 36 candidates.
Conclusions: The origin of Haumea's family is likely to be related to an impact event. However, a scenario explaining all the peculiarities of Haumea itself and its family remains elusive. 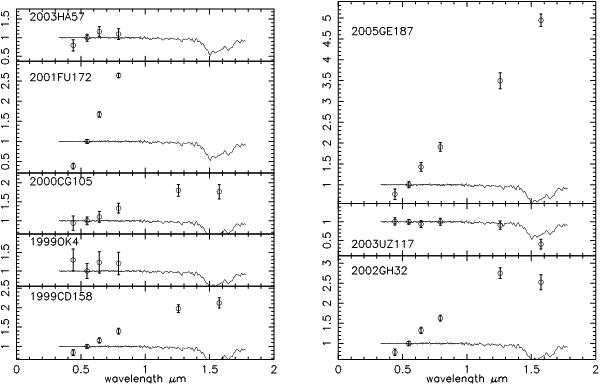