We present results of a strong-lensing analysis of MACS J0717.5+3745 (hereafter MACS J0717), an extremely X-ray luminous galaxy cluster at z = 0.55. Observations at different wavelengths reveal a complex and dynamically very active cluster, whose core is connected to a large scale filament extended over several Mpc. Using multi-passband imaging data obtained with the Hubble Space Telescope's Advanced Camera for Surveys (ACS), we identify 15 multiply imaged systems across the full field of view of ACS, five of which we confirmed spectroscopically in ground-based follow-up observations with the Keck telescope. We use these multiply imaged systems to constrain a parametric model of the mass distribution in the cluster core, employing a new parallelized version of the Lenstool software. The main result is that the most probable description of the mass distribution comprises four cluster-scale dark matter haloes. The total mass distribution follows the light distribution but strongly deviates from the distribution of the intra-cluster gas as traced by the X-ray surface brightness. This confirms the complex morphology proposed by previous studies. We interpret this segregation of collisional and collisionless matter as strong evidence of multiple mergers and ongoing dynamical activity. MACS J0717 thus constitutes one of the most disturbed clusters presently known and, featuring a projected mass within the ACS field of view (R = 150″ = 960 kpc) of 2.11 ± 0.23 × 1015 M☉, the system is also one of the most massive known.

Based on observations obtained with the Hubble Space Telescope (HST) and the Keck Telescope. 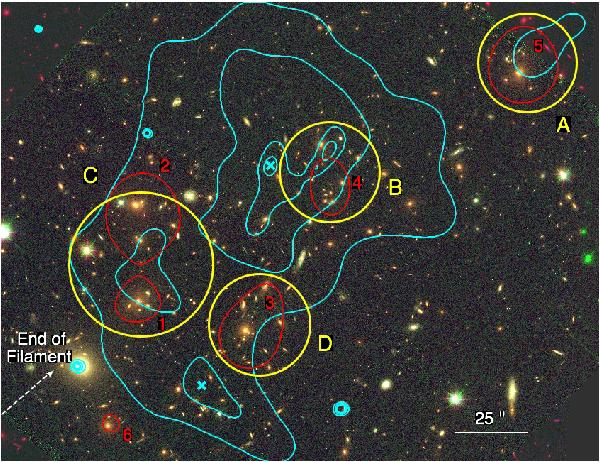