The star catalogues of Ptolemaios and Ulugh Beg. Machine-readable versions and comparison with the modern Hipparcos Catalogue

In late antiquity and throughout the middle ages, the positions of stars on the celestial sphere were obtained from the star catalogue of Ptolemaios. A catalogue based on new measurements appeared in 1437, with positions by Ulugh Beg, and magnitudes from the 10th-century astronomer al-Sufi. We provide machine-readable versions of these two star catalogues, based on the editions by Toomer (1998, Ptolemy's Almagest, 2nd edn.) and Knobel (1917, Ulugh Beg's catalogue of stars), and determine their accuracies by comparison with the modern Hipparcos Catalogue. The magnitudes in the catalogues correlate well with modern visual magnitudes; the indication "faint" by Ptolemaios is found to correspond to his magnitudes 5 and 6. Gaussian fits to the error distributions in longitude/latitude give widths σ ≃ 27'/23' in the range |∆λ,∆β| < 50' for Ptolemaios and σ ≃ 22'/18' in Ulugh Beg. Fits to the range |∆λ,∆β| < 100' gives 10-15% larger widths, showing that the error distributions are broader than Gaussians. The fraction of stars with positions wrong by more than 150' is about 2% for Ptolemaios and 0.1% in Ulugh Beg; the numbers of unidentified stars are 1 in Ptolemaios and 3 in Ulugh Beg. These numbers testify to the excellent quality of both star catalogues (as edited by Toomer and Knobel). 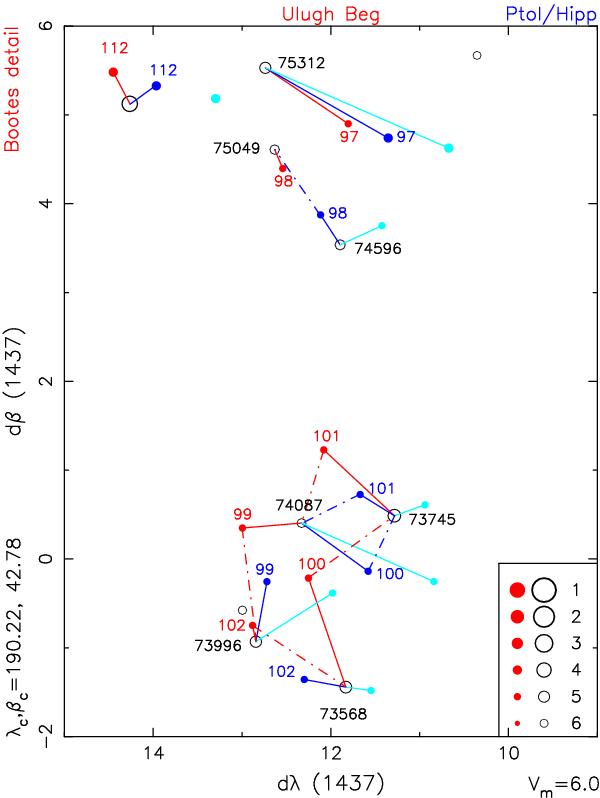