Context. The highly dynamical, complex nature of the solar atmosphere naturally implies the presence of waves in a topologically varied magnetic environment. Here, the interaction of waves with topological features such as null points is inevitable and potentially important for energetics. The low resistivity of the solar coronal plasma implies that non-magnetohydrodynamic (MHD) effects should be considered in studies of magnetic energy release in this environment.
Aims: This paper investigates the role of the Hall term in the propagation and dissipation of waves, their interaction with 2D magnetic X-points and the nature of the resulting reconnection.
Methods: A Lagrangian remap shock-capturing code (Lare2d) was used to study the evolution of an initial fast magnetoacoustic wave annulus for a range of values of the ion skin depth (δi) in resistive Hall MHD. A magnetic null-point finding algorithm was also used to locate and track the evolution of the multiple null-points that are formed in the system.
Results: Depending on the ratio of ion skin depth to system size, our model demonstrates that Hall effects can play a key role in the wave-null interaction. In particular, the initial fast-wave pulse now consists of whistler and ion-cyclotron components; the dispersive nature of the whistler wave leads to (i) earlier interaction with the null; (ii) the creation of multiple additional, transient nulls and, hence, an increased number of energy release sites. In the Hall regime, the relevant timescales (such as the onset of reconnection and the period of the oscillatory relaxation) of the system are reduced significantly, and the reconnection rate is enhanced. 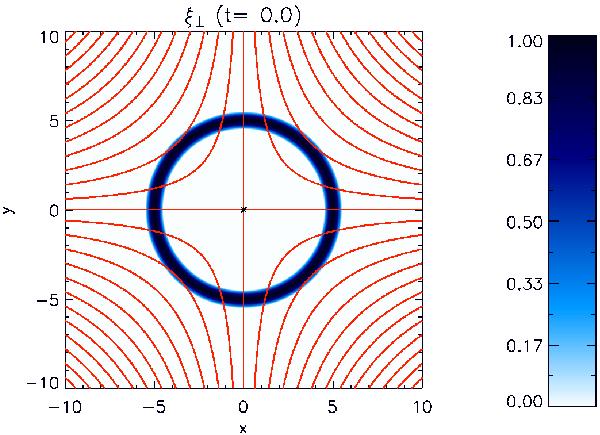