The International Deep Planet Survey. I. The frequency of wide-orbit massive planets around A-stars

Breakthrough direct detections of planetary companions orbiting A-type stars confirm the existence of massive planets at relatively large separations, but dedicated surveys are required to estimate the frequency of similar planetary systems. To measure the first estimation of the giant exoplanetary systems frequency at large orbital separation around A-stars, we have conducted a deep-imaging survey of young (8-400 Myr), nearby (19-84 pc) A- and F-stars to search for substellar companions in the ~10-300 AU range. The sample of 42 stars combines all A-stars observed in previous AO planet search surveys reported in the literature with new AO observations from VLT/NaCo and Gemini/NIRI. It represents an initial subset of the International Deep Planet Survey (IDPS) sample of stars covering M- to B-stars. The data were obtained with diffraction-limited observations in H- and Ks-band combined with angular differential imaging to suppress the speckle noise of the central stars, resulting in typical 5σ detection limits in magnitude difference of 12 mag at 1'', 14 mag at 2'' and 16 mag at 5'' which is sufficient to detect massive planets. A detailed statistical analysis of the survey results is performed using Monte Carlo simulations. Considering the planet detections, we estimate the fraction of A-stars having at least one massive planet (3-14 MJup) in the range 5-320 AU to be inside 5.9-18.8% at 68% confidence, assuming a flat distribution for the mass of the planets. By comparison, the brown dwarf (15-75 MJup) frequency for the sample is 2.0-8.9% at 68% confidence in the range 5-320 AU. Assuming power law distributions for the mass and semimajor axis of the planet population, the AO data are consistent with a declining number of massive planets with increasing orbital radius which is distinct from the rising slope inferred from radial velocity (RV) surveys around evolved A-stars and suggests that the peak of the massive planet population around A-stars may occur atseparations between the ranges probed by existing RV and AO observations. Finally, we report the discovery of three new close M-star companions to HIP 104365 and HIP 42334. 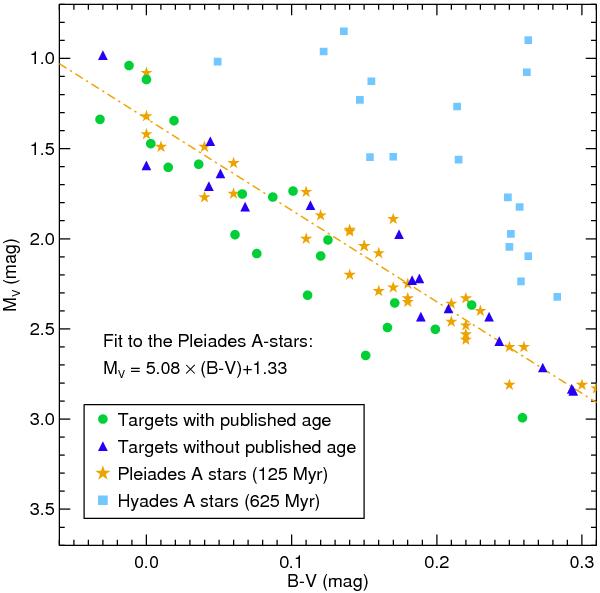