Aims: Our aim is to use precise radial velocity measurements and photometric data to derive the frequency spacing of the p-mode oscillation spectrum of the planet-hosting star β Gem. This spacing along with the interferometric radius for this star can then be used to derive an accurate stellar mass.
Methods: We use a long time series of over 60 h of precise stellar radial velocity measurements of β Gem taken with an iodine absorption cell at the echelle spectrograph mounted on the 2 m Alfred Jensch Telescope. We also present complementary photometric data for this star taken with the MOST microsatellite spanning 3.6 d. A Fourier analysis is used to derive the frequencies that are present in each data set.
Results: The Fourier analysis of the radial velocity data reveals the presence of up to 17 significant pulsation modes in the frequency interval 10-250 μHz. Most of these fall on a grid of equally-spaced frequencies having a separation of 7.14 ± 0.12 μHz. An analysis of 3.6 days of high precision photometry taken with the MOST space telescopes shows the presence of up to 16 modes, six of which are consistent with modes found in the spectral (radial velocity) data. This frequency spacing is consistent with high overtone radial pulsations; however, until the pulsation modes are identified we cannot be sure if some of these are nonradial modes or even mixed modes. The radial velocity frequency spacing along with angular diameter measurements of β Gem via interferometry results in a stellar mass of M = 1.91 ± 0.09 M⊙. This value confirms the intermediate mass of the star determined using stellar evolutionary tracks. Conclusions.β Gem is confirmed to be an intermediate mass star. Stellar pulsations in giant stars along with interferometric radius measurements can provide accurate determinations of the stellar mass of planet hosting giant stars. These can also be used to calibrate stellar evolutionary tracks.

Based on observations obtained at the 2 m Alfred Jensch Telescope at the Thüringer Landessternwarte Tautenburg and data from the MOST satellite, a Canadian Space Agency mission, jointly operated by Dynacon Inc., the University of Toronto Institute of Aerospace Studies and the University of British Columbia with the assistance of the University of Vienna.Tables of the radial velocities and photometric measurements are only available at the CDS via anonymous ftp to cdsarc.u-strasbg.fr (130.79.128.5) or via http://cdsarc.u-strasbg.fr/viz-bin/qcat?J/A+A/543/A98 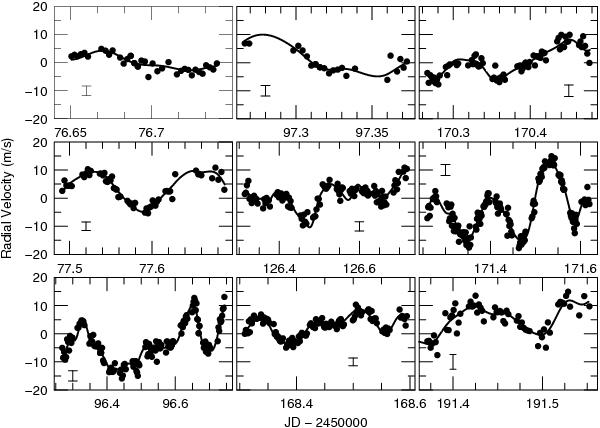