Context. Radiative losses from optically thin plasma are an important ingredient in modeling confined plasma in the solar corona. Spectral models are continuously updated to include the emission from more spectral lines, with significant effects on radiative losses, especially around 1 MK.
Aims: We investigate the effect of changes to the radiative-loss temperature dependence caused by upgrading spectral codes on the predictions obtained when modeling confined plasma in the solar corona.
Methods: We revisit the hydrodynamic simulation of a pulse-heated loop strand by comparing results obtained using an old and a recent radiative-loss function.
Results: We find that significant changes occur in the plasma evolution during the late phases of plasma cooling: when the more recent radiative-loss curve is used, the plasma cooling rate indeed increases significantly when temperatures reach 1-2 MK. This more rapid cooling occurs when the plasma density is higher than a threshold value, which in impulsive heating models leads to the loop plasma becoming overdense. This rapid cooling has the effect of steepening the slope in the emission measure distribution of coronal plasmas with temperature, at temperatures lower than ~2 MK, and of reducing the visibility of warm (1 MK) loops.
Conclusions: The effects of changes to the radiative-loss curves can be important when modeling the late phases of the evolution of pulse-heated coronal loops, and, in general, of thermally unstable optically thin plasmas. 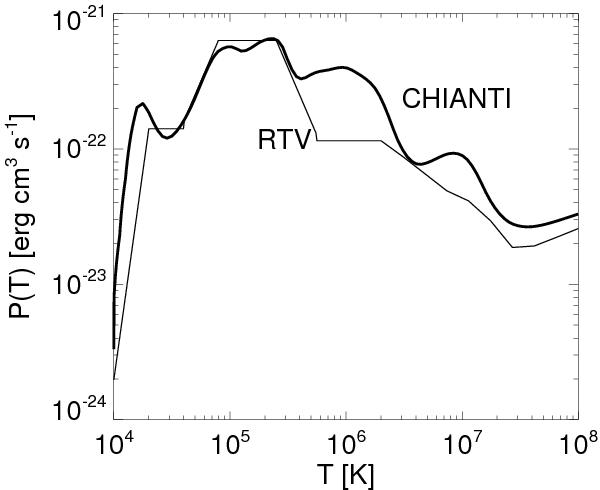