Context. Z CMa is a complex binary system composed of a Herbig Be and an FU Ori star. The Herbig star is surrounded by a dust cocoon of variable geometry, and the whole system is surrounded by an infalling envelope. Previous spectropolarimetric observations have reported a preferred orientation of the polarization angle, perpendicular to the direction of a very extended, parsec-sized jet associated with the Herbig star.
Aims: The variability in the amount of polarized light has been associated to changes in the geometry of the dust cocoon that surrounds the Herbig star. We aim to constrain the properties of Z CMa by means of imaging polarimetry at optical wavelengths.
Methods: Using ExPo, a dual-beam imaging polarimeter that operates at optical wavelengths, we have obtained imaging (linear) polarimetric data of Z CMa. Our observations were secured during the return to quiescence after the 2008 outburst.
Results: We detect three polarized features over Z CMa. Two of these features are related to the two jets reported in this system: the large jet associated to the Herbig star, and the micro-jet associated to the FU Ori star. Our results suggest that the micro-jet extends to a distance ten times longer than reported in previous studies. The third feature suggests the presence of a hole in the dust cocoon that surrounds the Herbig star of this system. According to our simulations, this hole can produce a pencil beam of light that we see scattered off the low-density envelope surrounding the system.

Based on observations made with the William Herschel Telescope operated on the island of La Palma by the Isaac Newton Group in the Spanish Observatorio del Roque de los Muchachos of the Instituto de Astrofísica de Canarias. 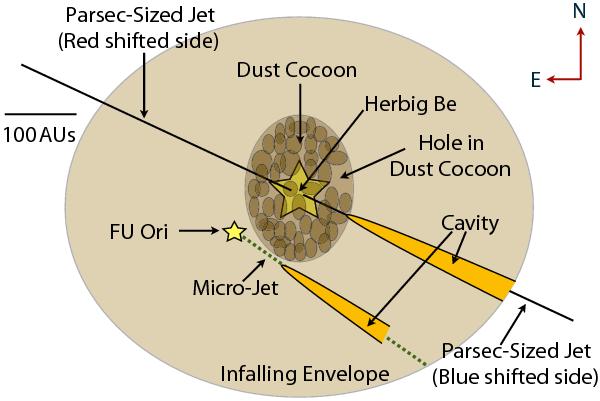