We have obtained new velocity-resolved spectra of the [CII] 158 μm line towards the Ring Nebula in Lyra (NGC 6720), one of the best-studied planetary nebulae, in order to probe its controversial 3-dimensional structure and to estimate the mass of circumstellar material in this object. We used the terahertz receiver GREAT aboard the SOFIA airborne telescope to obtain the [CII] spectra at eight locations within and outside the bright optical ring of NGC 6720. Emission was detected at all positions except for the most distant position along the nebula's minor axis, and generally covers a broad velocity range, ΔV ~ 50 km s-1 (FWZI), except at a position along the major axis located just outside the optical ring, where it is significantly narrower (ΔV ~ 25 km s-1). The one narrow spectrum appears to be probing circumstellar material lying outside the main nebular shell that has not been accelerated by past fast wind episodes from the central star, and therefore most likely comes from equatorial and/or low-latitude regions of this multipolar nebula. Along lines-of-sight passing within about 10'' of the nebular center, the CII column density is a factor 46 higher than the CO column density. The total mass of gas associated with the [CII] emission inside a circular region of diameter 87.″5 is at least 0.11 M⊙. A significant amount of [CII] flux arises from a photodissociation region immediately outside the bright optical ring, where we find a CII to CO ratio of >6.5, lower than that seen towards the central region. Comparing our data with lower-quality CI spectra, which indicate similarly large CI/CO ratios in NGC 6720, we conclude that the bulk of elemental carbon in NGC 6720 is divided roughly equally between CII and CI, and that the emissions from these species are far more robust tracers of circumstellar material than CO in this object and other evolved planetary nebulae. 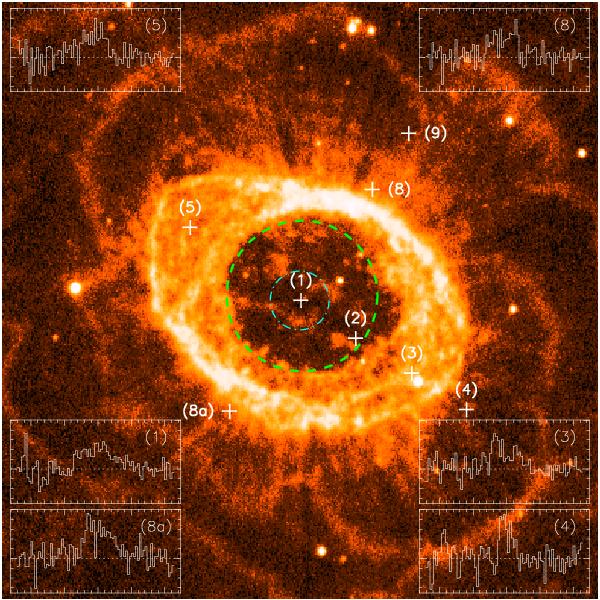