Context. We analyze the NGC 2024 Hii region and molecular cloud interface using [12Cii] and [13Cii] observations.
Aims: We attempt to gain insight into the physical structure of the interface layer between the molecular cloud and the Hii region.
Methods: Observations of [12Cii] and [13Cii] emission at 158 μm with high spatial and spectral resolution allow us to study the detailed structure of the ionization front and estimate the column densities and temperatures of the ionized carbon layer in the photon-dominated region.
Results: The [12Cii] emission closely follows the distribution of the 8 μm continuum. Across most of the source, the spectral lines have two velocity peaks similar to lines of rare CO isotopes. The [13Cii] emission is detected near the edge-on ionization front. It has only a single velocity component, which implies that the [12Cii] line shape is caused by self-absorption. An anomalous hyperfine line-intensity ratio observed in [13Cii] cannot yet be explained.
Conclusions: Our analysis of the two isotopes results in a total column density of N(H) ≈ 1.6 × 1023 cm-2 in the gas emitting the [Cii] line. A large fraction of this gas has to be at a temperature of several hundred K. The self-absorption is caused by a cooler (T ≤ 100 K) foreground component containing a column density of N(H) ≈ 1022 cm-2. 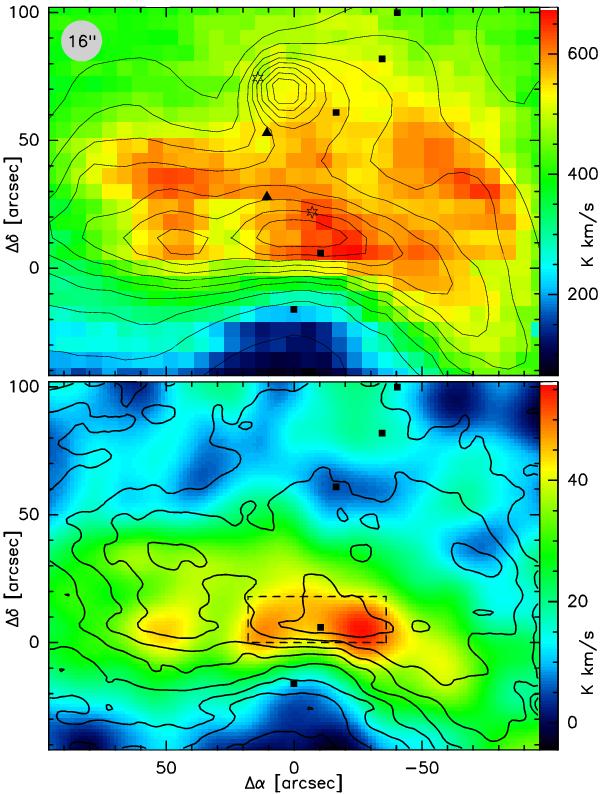