SOFIA observations of S106: dynamics of the warm gas

Context. The H II region/PDR/molecular cloud complex S106 is excited by a single O-star. The full extent of the warm and dense gas close to the star has not been mapped in spectrally resolved high-J CO or [C II] lines, so the kinematics of the warm, partially ionized gas, are unknown. Whether the prominent dark lane bisecting the hourglass-shaped nebula is due solely to the shadow cast by a small disk around the exciting star or also to extinction in high column foreground gas was an open question until now.
Aims: We disentangle the morphology and kinematics of warm neutral and ionized gas close to the star, study their relation to the bulk of the molecular gas, and we investigate the nature of the dark lane.
Methods: We used the heterodyne receiver GREAT onboard on SOFIA to observe velocity resolved spectral lines of [C II] and CO 11 → 10 in comparison with so far unpublished submm continuum data at 350 μm (SHARC-II) and complementary molecular line data.
Results: The high angular and spectral resolution observations show a very complex morphology and kinematics of the inner S106 region, with many different components at different excitation conditions contributing to the observed emission. The [C II] lines are found to be bright and very broad, tracing high velocity gas close to the interface of molecular cloud and H II region. CO 11 → 10 emission is more confined, both spatially and in velocity, to the immediate surroundings of S106 IR showing the presence of warm, high density (clumpy) gas. Our high angular resolution submm continuum observations rule out the scenario where the dark lane separating the two lobes is due solely to the shadow cast by a small disk close to the star. The lane is clearly seen also as warm, high column density gas at the boundary of the molecular cloud and H II region. 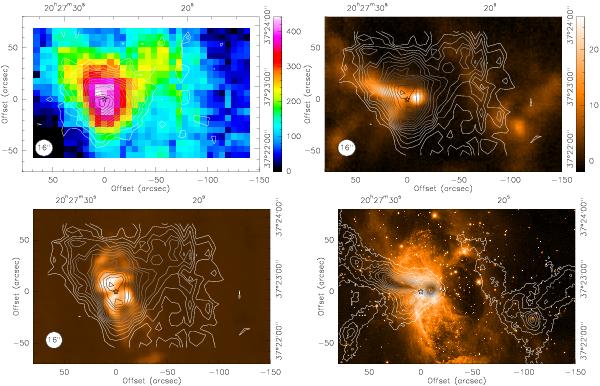