Orbital characterization of the β Pictoris b giant planet

Context. In June 2010, we confirmed the existence of a giant planet in the disk of the young star located between 8 AU and 15 AU from the star. This young planet offers the rare opportunity to monitor a large fraction of the orbit using the imaging technique over a reasonably short timescale. It also offers the opportunity to study its atmospheric properties using spectroscopy and multi-band photometry, and possibly derive its dynamical mass by combining imaging with radial velocity data to set tight constraints on giant planet formation theories.
Aims: We aim to measure the evolution of the planet's position relative to the star to determine the planetary orbital properties. Our ultimate goal is to relate both the planetary orbital configuration and physical properties to either the disk structure or the cometary activity observed for decades in the system.
Methods: Using the NAOS-CONICA adaptive-optics instrument (NACO) at the Very Large Telescope (VLT), we obtained repeated follow-up images of the system in the Ks and L' filters at four new epochs in 2010 and 2011. Complementing these data with previous measurements, we conduct a homogeneous analysis, which covers more than eight yrs, to accurately monitor the b position relative to the star. We then carefully consider the various sources of uncertainties that may affect the orbital parameter determination.
Results: On the basis of the evolution of the planet's relative position with time, we derive the best-fit orbital solutions for our measurements using two fitting methods, a least squares Levenberg-Marquardt algorithm and a Markov-chain Monte Carlo approach. More reliable results are found with the second approach as our measurements do not cover the complete planetary orbit, and are biased toward the most recent epochs since the planet recovery. The solutions favor a low-eccentricity orbit e ≲ 0.17, with semi-major axis in the range 8-9 AU corresponding to orbital periods of 17-21 yrs. Our solutions favor a highly inclined solution with a peak around i = 88.5 ± 1.7°, and a longitude of ascending node tightly constrained at Ω = -147.5 ± 1.5°. These results indicate that the orbital plane of the planet is likely to be above the midplane of the main disk, and compatible with the warp component of the disk being tilted between 3.5 deg and 4.0 deg. This suggests that the planet plays a key role in the origin of the inner warped-disk morphology of the disk. Finally, these orbital parameters are consistent with the hypothesis that the planet is responsible for the transit-like event observed in November 1981, and also linked to the cometary activity observed in the system. 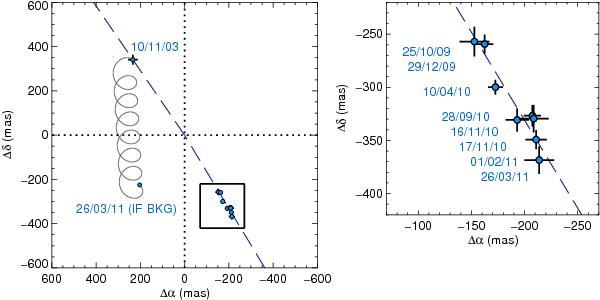