Aims: Spiral structure is a prominent feature in many disk galaxies and is often outlined by bright, young objects. We study the distribution of young stellar clusters in grand-design spiral galaxies and thereby determine whether strong spiral perturbations can influence star formation.
Methods: Deep, near-infrared JHK-maps were observed for ten nearby, grand-design, spiral galaxies using HAWK-I at the Very Large Telescope. Complete, magnitude-limited candidate lists of star-forming complexes were obtained by searching within the K-band maps. The properties of the complexes were derived from (H - K) - (J - H) diagrams including the identification of the youngest complexes (i.e. ≲7 Myr) and the estimation of their extinction.
Results: Young stellar clusters with ages ≲7 Myr have significant internal extinction in the range of AV = 3-7m, while older ones typically have AV < 1m. The cluster luminosity function (CLF) is well-fitted by a power law with an exponent of around -2 and displays no evidence of a high luminosity cut-off. The brightest cluster complexes in the disk reach luminosities of MK = -15.5m or estimated masses of 106 M☉. At radii with a strong, two-armed spiral pattern, the star formation rate in the arms is higher by a factor of 2-5 than in the inter-arm regions. The CLF in the arms is also shifted towards brighter MK by at least 0.4m. We also detect clusters with colors compatible with Large Magellanic Cloud intermediate age clusters and Milky Way globular clusters. The (J - K) - MK diagram of several galaxies shows, for the brightest clusters, a clear separation between young clusters that are highly attenuated by dust and older ones with low extinction.
Conclusions: The gap in the (J - K) - MK diagrams implies that there has been a rapid expulsion of dust at an age around 7 Myr, possibly triggered by supernovae. Strong spiral perturbations concentrate the formation of clusters in the arm regions and shifts their CLF towards brighter magnitudes. 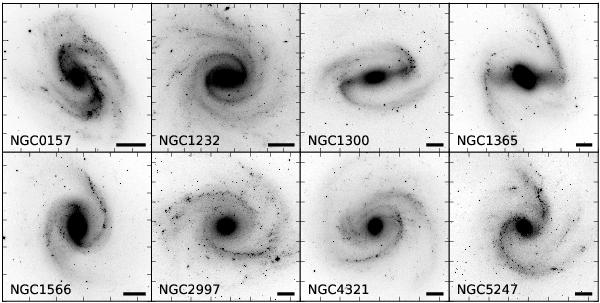