Context. Coordinated observations of a GOES B4.8 microflare with SDO's Atmospheric Imaging Assembly (AIA) and the Ramaty High Energy Solar Spectroscopic Imager (RHESSI) on 2010 July 31 show that emission in all seven of AIA's EUV channels brightened simultaneously nearly 6 min before RHESSI or GOES detected emission from plasma at temperatures around 10 MK.
Aims: To help interpret these and AIA flare observations in general, we characterized the expected temporal responses of AIA's 94, 131, 171, 193, 211, and 335 Å channels to solar flare brightenings by combining (1) AIA's nominal temperature response functions available through SSWIDL with (2) EUV spectral line data observed in a flare loop footpoint on 2001 April 24 with the Coronal Diagnostic Spectrometer (CDS) on timescales comparable to AIA's image cadence.
Methods: The nine emission lines observed by CDS cover a wide range of formation temperature from about 0.05 to 8 MK. Line brightenings observed early during the CDS flare occurred at temperatures less than about 0.7 MK, with the largest values around 0.1 MK. These brightenings were consistent with the flare's energy transport being dominated by nonthermal particle beams. Because all of AIA's EUV channels are sensitive to emission from plasma in the 0.1 to 0.7 MK temperature range, we show that all of AIA's EUV channels will brighten simultaneously during flares like this, in which energy transport is dominated by nonthermal particle beams.
Results: The 2010 July 31 flare observed by AIA and RHESSI displays this behavior, so we conclude that such beams likely dominated the flare's energy transport early during the event. When thermal conduction from a reconnection-heated, hot (~10 MK) plasma dominates the energy transport, the AIA channels that are sensitive to emission from such temperatures (particularly the 94 and 131 Å channels) will brighten earlier than the channels that are not sensitive to such temperatures (171 and 211 Å).
Conclusions: Thus, based on the differences expected between AIA's response to flares whose energy transport is dominated by nonthermal particle beams from those whose energy transport is dominated by thermal conduction, AIA can be used to determine the dominant energy transport mechanism for any given event.

Movie is available in electronic form at http://www.aanda.org 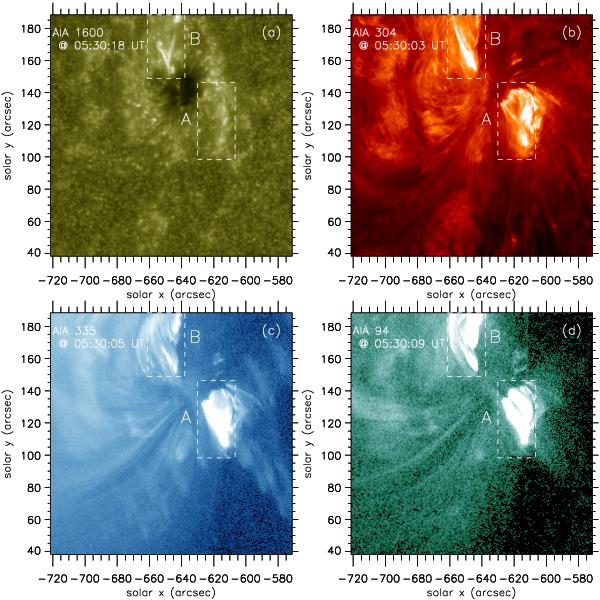