Present-day cosmic abundances. A comprehensive study of nearby early B-type stars and implications for stellar and Galactic evolution and interstellar dust models

Context. Early B-type stars are ideal indicators for present-day cosmic abundances since they preserve their pristine abundances and typically do not migrate far beyond their birth environments over their short lifetimes, in contrast to older stars like the Sun. They are also unaffected by depletion onto dust grains, unlike the cold/warm interstellar medium (ISM) or H ii regions.
Aims: A carefully selected sample of early B-type stars in OB associations and the field within the solar neighbourhood is studied comprehensively. Quantitative spectroscopy is used to characterise their atmospheric properties in a self-consistent way. Present-day abundances for the astrophysically most interesting chemical elements are derived in order to investigate whether a present-day cosmic abundance standard can be established.
Methods: High-resolution and high-S/N FOCES, FEROS and ELODIE spectra of well-studied sharp-lined early B-type stars are analysed in non-LTE. Line-profile fits based on extensive model grids and an iterative analysis methodology are used to constrain stellar parameters and elemental abundances at high accuracy and precision. Atmospheric parameters are derived from the simultaneous establishment of independent indicators, from multiple ionization equilibria and the Stark-broadened hydrogen Balmer lines, and they are confirmed by reproduction of the stars' global spectral energy distributions.
Results: Effective temperatures are constrained to 1-2% and surface gravities to less than 15% uncertainty, along with accurate rotational, micro- and macroturbulence velocities. Good agreement of the resulting spectroscopic parallaxes with those from the new reduction of the Hipparcos catalogue is obtained. Absolute values for abundances of He, C, N, O, Ne, Mg, Si and Fe are determined to better than 25% uncertainty. The synthetic spectra match the observations reliably over almost the entire visual spectral range. Three sample stars, γ Ori, o Per and θ1 Ori D, are identified as double-lined, indicating the presence of an early/mid B-type companion.
Conclusions: A present-day cosmic abundance standard is established from a sample of 29 early B-type stars, indicating abundance fluctuations of less than 10% around the mean. Our results (i) resolve the long-standing discrepancy between a chemical homogeneous gas-phase ISM and a chemically inhomogeneous young stellar component out to several hundred parsec from the Sun, (ii) facilitate the amount of heavy elements locked up in the interstellar dust to be constrained precisely - the results imply that carbonaceous dust is largely destroyed inside the Orion H ii region, unlike the silicates, and that graphite is only a minority species in interstellar dust -, (iii) show that the mixing of CNO-burning products in the course of massive star evolution follows tightly the predicted nuclear path, (iv) provide reliable present-day reference points for anchoring Galactic chemical evolution models to observation, and (v) imply that the Sun has migrated outwards from the inner Galactic disk over its lifetime from a birthplace at a distance around 5-6 kpc from the Galactic Centre; a cancellation of the effects of Galactic chemical evolution and abundance gradients leads to the similarity of solar and present-day cosmic abundances in the solar neighbourhood, with a telltaling signature of the Sun's origin left in the C/O ratio.

Based on observations collected at the Centro Astronómico Hispano Alemán (CAHA) at Calar Alto, operated jointly by the Max- Planck Institut für Astronomie and the Instituto de Astrofísica de Andalucía (CSIC), proposals H2001-2.2-011 and H2005-2.2-016. Based on observations collected at the European Southern Observatory, Chile, ESO 074.B-0455(A). Based on spectral data retrieved from the ELODIE archive at Observatoire de Haute-Provence (OHP).Tables 5 and 6 are also available in electronic form at the CDS via anonymous ftp to cdsarc.u-strasbg.fr (130.79.128.5) or via http://cdsarc.u-strasbg.fr/viz-bin/qcat?J/A+A/539/A143 Figures 4, 7, 8-11 and Tables 7, 8 are available in electronic form at http://www.aanda.org 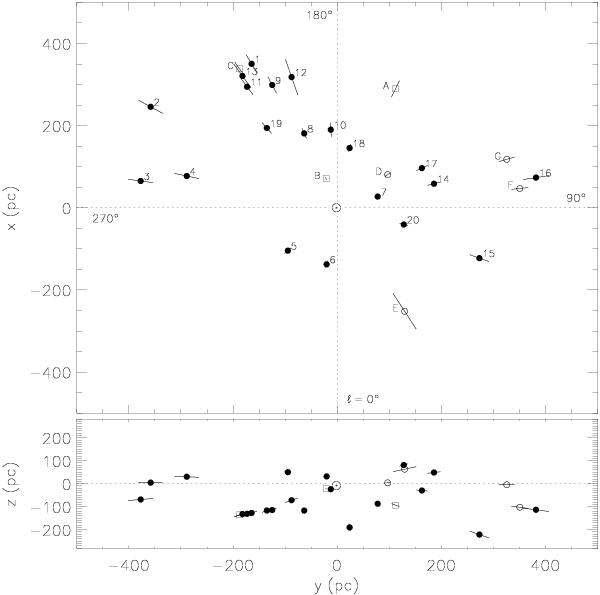