Numerical calculation of convection with reduced speed of sound technique

Context. The anelastic approximation is often adopted in numerical calculations with low Mach numbers, such as those including stellar internal convection. This approximation requires so-called frequent global communication, because of an elliptic partial differential equation. Frequent global communication is, however, negative factor for the parallel computing performed with a large number of CPUs.
Aims: We test the validity of a method that artificially reduces the speed of sound for the compressible fluid equations in the context of stellar internal convection. This reduction in the speed of sound leads to longer time steps despite the low Mach number, while the numerical scheme remains fully explicit and the mathematical system is hyperbolic, thus does not require frequent global communication.
Methods: Two- and three-dimensional compressible hydrodynamic equations are solved numerically. Some statistical quantities of solutions computed with different effective Mach numbers (owing to the reduction in the speed of sound) are compared to test the validity of our approach.
Results: Numerical simulations with artificially reduced speed of sound are a valid approach as long as the effective Mach number (based on the lower speed of sound) remains less than 0.7. 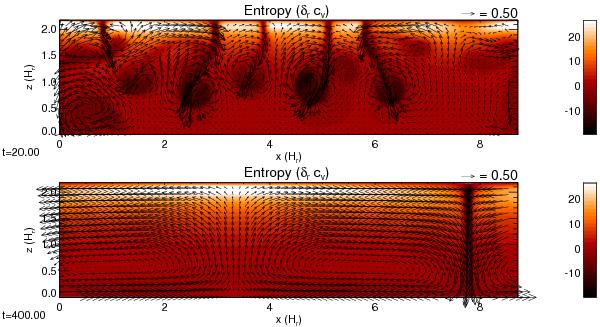