We report the discovery of two new transiting hot Jupiters, KOI-135b and KOI-204b, which were previously identified as planetary candidates by the Kepler team, and independently confirm the planetary nature of Kepler-17b, recently announced by Désert et al. (2011, ApJS, 197, 14). Radial-velocity measurements, taken with the SOPHIE spectrograph at the Observatoire de Haute-Provence (France), and Kepler photometry (Q1 and Q2 data) were used to derive the orbital, stellar, and planetary parameters. KOI-135b and KOI-204b orbit their parent stars in ~3.02 and 3.25 days, respectively. They have approximately the same radius, Rp = 1.20 ± 0.06 RJup and 1.24 ± 0.07 RJup, but different masses Mp = 3.23 ± 0.19 MJup and 1.02 ± 0.07 MJup. As a consequence, their bulk densities differ by a factor of four, ρp = 2.33 ± 0.36 g cm-3 (KOI-135b) and 0.65 ± 0.12 g cm-3 (KOI-204b), meaning that their interior structures are different. All three planets orbit metal-rich stars with [Fe/H] ~ 0.3 dex. Our SOPHIE spectra of Kepler-17 were used both to measure the radial-velocity variations and to determine the stellar atmospheric parameters, allowing us to refine the characterisation of the planetary system. In particular we found the radial-velocity semi-amplitude and the stellar mass to be respectively slightly smaller and larger than in Désert et al. These two quantities, however, compensate and lead to a fully consistent planetary mass. Our analysis gives Mp = 2.47 ± 0.10 MJup and Rp = 1.33 ± 0.04 RJup. We found evidence of a younger age for this planetary system, t < 1.8 Gyr, which is supported by both evolutionary tracks and gyrochronology. Finally, we confirm the detection of the optical secondary eclipse by Désert et al. and also find the brightness phase variation with the Q1 and Q2 Kepler data. The latter indicates a low redistribution of stellar heat to the night side (<16% at 1-σ), if the optical planetary occultation comes entirely from thermal flux. The geometric albedo is Ag < 0.12 (1-σ).

Based on observations made with SOPHIE on the 1.93-m telescope at Observatoire de Haute-Provence (CNRS), France. 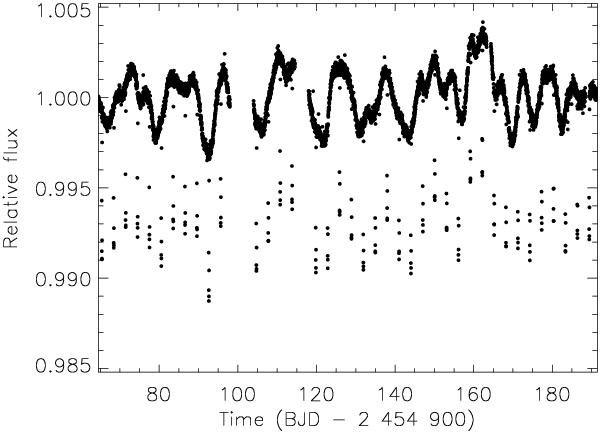