Comparison between observed and theoretical O IV line ratios in the UV/EUV solar spectrum as derived by SUMER, CDS and EIS


Aims: The joint use of SoHO Solar Ultraviolet Measurement of Emitted Radiation (SUMER), Coronal Diagnostic Spectrometer (CDS) and Hinode Extreme-ultraviolet Imaging Spectrometer (EIS) allow observation of several O iv line ratios, useful for temperature plasma diagnostics. Accurate atomic data are required to avoid interpretation errors in deriving the electron temperature from these ratios. Muglach et al. (2010) found that the measured ratio I(787.72 Å)/I(279.93 Å) is lower than the predicted value by a factor 2-5. Here the predicted value for this ratio is revised using updated atomic data. A comparison with other observed O iv line ratios is shown and the electron temperature is derived.
Methods: The analysis is based on new observations made during the observational campaign of April 2009 and including three O iv multiplets. The theoretical ratios have been derived using the Atomic Data and Analysis Structure (ADAS) database and include comparison with the most recent calculations available in the literature.
Results: The discrepancy for the O iv I(787.72 Å)/I(279.93 Å) ratio has been solved by adding transitions involving higher excited levels, which have been omitted in previous atomic models. This results in a decrease of the theoretical line ratio, providing electron temperatures in the range of log T = 5.17-5.39, close to the temperature expected from a plasma in ionisation equilibrium. 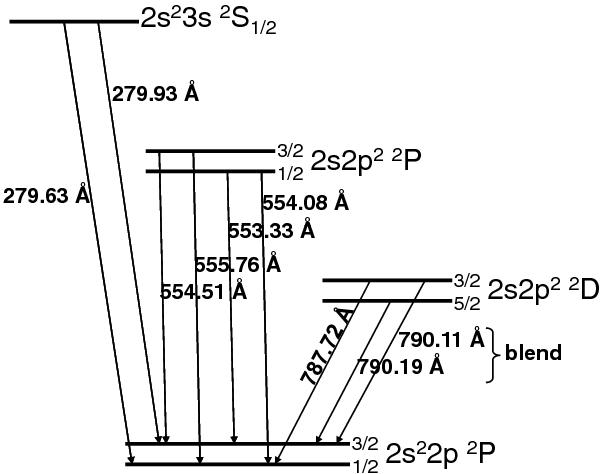