The final product of galaxy evolution through cosmic time is the population of galaxies in the local universe. These galaxies are also those that can be studied in most detail, thus providing a stringent benchmark for our understanding of galaxy evolution. Through the huge success of spectroscopic single-fiber, statistical surveys of the Local Universe in the last decade, it has become clear, however, that an authoritative observational description of galaxies will involve measuring their spatially resolved properties over their full optical extent for a statistically significant sample. We present here the Calar Alto Legacy Integral Field Area (CALIFA) survey, which has been designed to provide a first step in this direction. We summarize the survey goals and design, including sample selection and observational strategy. We also showcase the data taken during the first observing runs (June/July 2010) and outline the reduction pipeline, quality control schemes and general characteristics of the reduced data. This survey is obtaining spatially resolved spectroscopic information of a diameter selected sample of ~600 galaxies in the Local Universe (0.005 < z < 0.03). CALIFA has been designed to allow the building of two-dimensional maps of the following quantities: (a) stellar populations: ages and metallicities; (b) ionized gas: distribution, excitation mechanism and chemical abundances; and (c) kinematic properties: both from stellar and ionized gas components. CALIFA uses the PPAK integral field unit (IFU), with a hexagonal field-of-view of ~1.3⎕', with a 100% covering factor by adopting a three-pointing dithering scheme. The optical wavelength range is covered from 3700 to 7000 Å, using two overlapping setups (V500 and V1200), with different resolutions: R ~ 850 and R ~ 1650, respectively. CALIFA is a legacy survey, intended for the community. The reduced data will be released, once the quality has been guaranteed. The analyzed data fulfillthe expectations of the original observing proposal, on the basis of a set of quality checks and exploratory analysis: (i) the final datacubes reach a 3σ limiting surface brightness depth of ~23.0 mag/arcsec2 for the V500 grating data (~22.8 mag/arcsec2 for V1200); (ii) about ~70% of the covered field-of-view is above this 3σ limit; (iii) the data have a blue-to-red relative flux calibration within a few percent in most of the wavelength range; (iv) the absolute flux calibration is accurate within ~8%with respect to SDSS; (v) the measured spectral resolution is ~85 km s-1 for V1200 (~150 km s-1 for V500); (vi) the estimated accuracy of the wavelength calibration is ~5 km s-1 for the V1200 data (~10 km s-1 for the V500 data); (vii) the aperture matched CALIFA and SDSS spectra are qualitatively and quantitatively similar. Finally, we show that we are able to carry out all measurements indicated above, recovering the properties of the stellar populations, the ionized gas andthe kinematics of both components. The associated maps illustrate the spatial variation of these parameters across the field, reemphasizing the redshift dependence of single aperture spectroscopic measurements. We conclude from this first look at the data that CALIFA will be an important resource for archaeological studies of galaxies in the Local Universe.

Based on observations collected at the Centro Astronómico Hispano Alemán (CAHA) at Calar Alto, operated jointly by the Max-Planck-Institut für Astronomie and the Instituto de Astrofísica de Andalucía (CSIC). 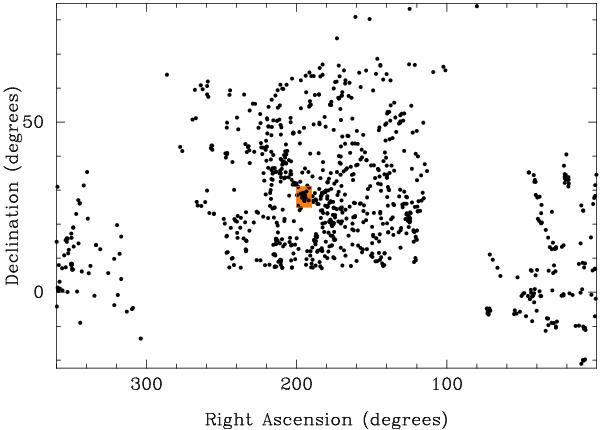