Aims: We investigate a method to increase the efficiency of a targeted exoplanet search with the transit technique by preselecting a subset of candidates from large catalogs of stars. Assuming spin-orbit alignment, this can be achieved by considering stars that have a higher probability to be oriented nearly equator-on (inclination close to 90°).
Methods: We used activity-rotation velocity relations for low-mass stars with a convective envelope to study the dependence of the position in the activity-vsini diagram on the stellar axis inclination. We composed a catalog of G-, K-, M-type main-sequence simulated stars using isochrones, an isotropic inclination distribution and empirical relations to obtain their rotation periods and activity indexes. Then the activity-vsini diagram was completed and statistics were applied to trace the areas containing the higher ratio of stars with inclinations above 80°. A similar statistics was applied to stars from real catalogs with log(R'HK) and vsini data to find their probability of being oriented equator-on.
Results: We present our method to generate the simulated star catalog and the subsequent statistics to find the highly inclined stars from real catalogs using the activity-vsini diagram. Several catalogs from the literature are analyzed and a subsample of stars with the highest probability of being equator-on is presented.
Conclusions: Assuming spin-orbit alignment, the efficiency of an exoplanet transit search in the resulting subsample of probably highly inclined stars is estimated to be two to three times higher than with a general search without preselection. 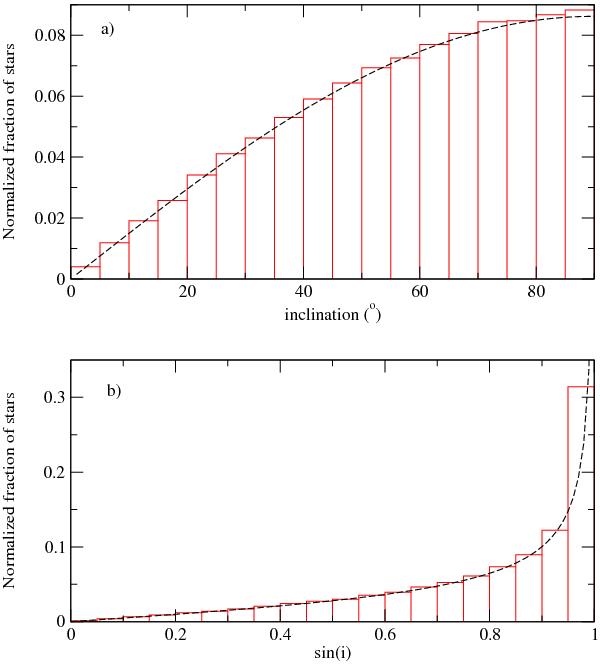