Context. For a long time the consensus has been that star formation rates are higher in the interior of spiral arms in galaxies, compared to inter-arm regions. However, recent studies have found that the star formation inside the arms is not more efficient than elsewhere in the galaxy. Previous studies have based their conclusion mainly on integrated light. We use resolved stellar populations to investigate the star formation rates throughout the nearby spiral galaxy NGC 5236.
Aims: We aim to investigate how the star formation rate varies in the spiral arms compared to the inter-arm regions, using optical space-based observations of NGC 5236.
Methods: Using ground-based Hα images we traced regions of recent star formation, and reconstructed the arms of the galaxy. Using HST/ACS images we estimate star formation histories by means of the synthetic CMD method.
Results: Arms based on Hα images showed to follow the regions where stellar crowding is higher. Star formation rates for individual arms over the fields covered were estimated between 10 to 100 Myr, where the stellar photometry is less affected by incompleteness. Comparison between arms and inter-arm surface star formation rate densities (ΣSFR) suggested higher values in the arms (~0.6 dex). Over a small fraction of one arm we checked how the ΣSFR changes for the trailing and leading part. The leading part of the arm showed to have a higher ΣSFR in the age range 10-100 Myr.
Conclusions: Predictions from the density wave theory of a rapid increase in the star formation at the edge where the stars and the gas enter the density wave are confirmed. The ΣSFR presents a steep decrease with distance from the center of the arms through the inter-arm regions. 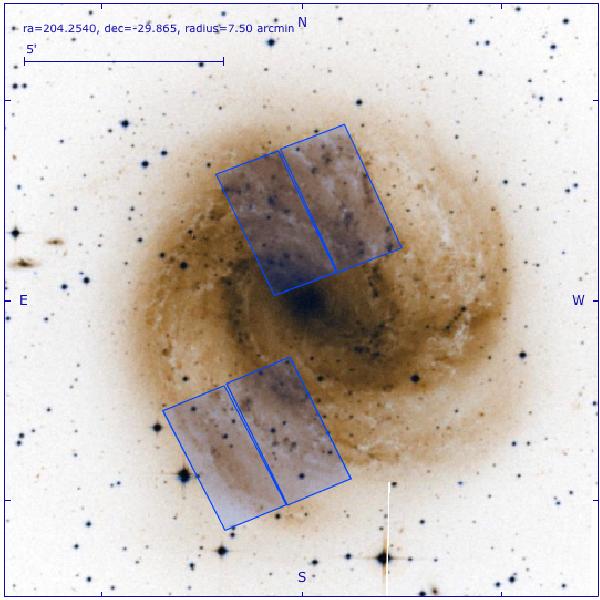