Context. Observations of transiting extrasolar planets are of key importance to our understanding of planets because their mass, radius, and mass density can be determined. These measurements indicate that planets of similar mass can have very different radii. For low-density planets, it is generally assumed that they are inflated owing to their proximity to the host-star. To determine the causes of this inflation, it is necessary to obtain a statistically significant sample of planets with precisely measured masses and radii.
Aims: The CoRoT space mission allows us to achieve a very high photometric accuracy. By combining CoRoT data with high-precision radial velocity measurements, we derive precise planetary radii and masses. We report the discovery of CoRoT-19b, a gas-giant planet transiting an old, inactive F9V-type star with a period of four days.
Methods: After excluding alternative physical configurations mimicking a planetary transit signal, we determine the radius and mass of the planet by combining CoRoT photometry with high-resolution spectroscopy obtained with the echelle spectrographs SOPHIE, HARPS, FIES, and SANDIFORD. To improve the precision of its ephemeris and the epoch, we observed additional transits with the TRAPPIST and Euler telescopes. Using HARPS spectra obtained during the transit, we then determine the projected angle between the spin of the star and the orbit of the planet.
Results: We find that the host star of CoRoT-19b is an inactive F9V-type star close to the end of its main-sequence life. The host star has a mass M∗ = 1.21 ± 0.05 M⊙ and radius R∗ = 1.65 ± 0.04 R⊙. The planet has a mass of MP = 1.11 ± 0.06 MJup and radius of RP = 1.29 ± 0.03 RJup. The resulting bulk density is only ρ = 0.71 ± 0.06 g cm-3, which is much lower than that for Jupiter.
Conclusions: The exoplanet CoRoT-19b is an example of a giant planet of almost the same mass as Jupiter but a ≈30% larger radius.

The CoRoT space mission, launched on December 27, 2006, has been developed and is operated by the CNES, with the contribution of Austria, Belgium, Brazil, ESA (RSSD and Science Program), Germany and Spain. Partly based on observations obtained at the European Southern Observatory at Paranal, Chile in program 184.C-0639, and partly based on observations conducted at McDonald Observatory. 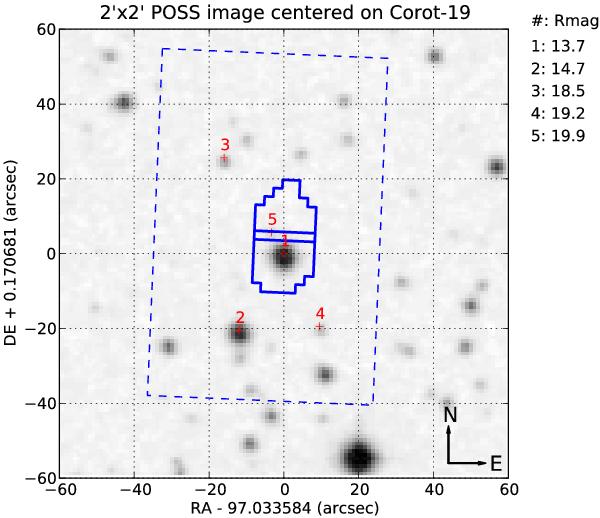