We report the detection of CoRoT-23b, a hot Jupiter transiting in front of its host star with a period of 3.6314 ± 0.0001 days. This planet was discovered thanks to photometric data secured with the CoRoT satellite, combined with spectroscopic radial velocity (RV) measurements. A photometric search for possible background eclipsing binaries conducted at CFHT and OGS concluded with a very low risk of false positives. The usual techniques of combining RV and transit data simultaneously were used to derive stellar and planetary parameters. The planet has a mass of Mp = 2.8 ± 0.3 MJup, a radius of Rpl= 1.05 ± 0.13RJup, a density of ≈ 3 g cm-3. RV data also clearly reveal a nonzero eccentricity of e = 0.16 ± 0.02. The planet orbits a mature G0 main sequence star of V = 15.5 mag, with a mass M⋆ = 1.14 ± 0.08 M⊙, a radius R ⋆ = 1. 61 ± 0.18 R⊙ and quasi-solarabundances. The age of the system is evaluated to be 7 Gyr, not far from the transition to subgiant, in agreement with the rather large stellar radius. The two features of a significant eccentricity of the orbit and of a fairly high density are fairly uncommon for a hot Jupiter. The high density is, however, consistent with a model of contraction of a planet at this mass, given the age of the system. On the other hand, at such an age, circularization is expected to be completed. In fact, we show that for this planetary mass and orbital distance, any initial eccentricity should not totally vanish after 7 Gyr, as long as the tidal quality factor Qp is more than a few 105, a value that is the lower bound of the usually expected range. Even if CoRoT-23b features a density and an eccentricity that are atypical of a hot Jupiter, it is thus not an enigmatic object.

The CoRoT space mission, launched on 27 December 2006, has been developed and is operated by CNES, with the contribution of Austria, Belgium, Brazil, ESA, Germany, and Spain. First CoRoT data are available to the public from the CoRoT archive: http://idoc-corot.ias.u-psud.fr. The complementary observations were obtained with MegaPrime/MegaCam, a joint project of CFHT and CEA/DAPNIA, at the Canada-France-Hawaii Telescope (CFHT) which is operated by NRC in Canada, INSU-CNRS in France, and the University of Hawaii; ESO Telescopes at the La Silla and Paranal Observatories under program 184.C0639; the OGS telescope operated by the Instituto de Astrofísica de Tenerife at Tenerife. 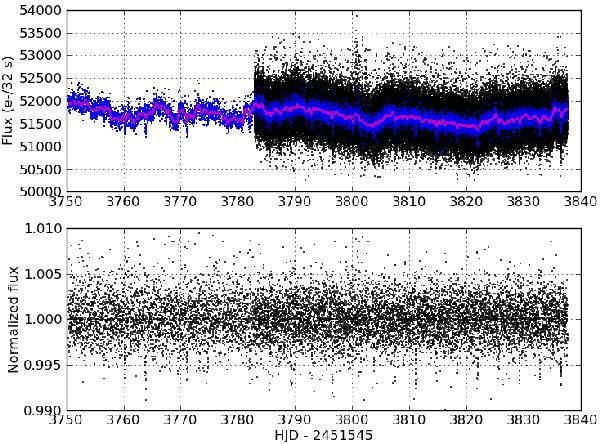