Circum-planetary discs as bottlenecks for gas accretion onto giant planets

Context. With hundreds of exoplanets detected, it is necessary to revisit giant planets accretion models to explain their mass distribution. In particular, formation of sub-jovian planets remains unclear, given the short timescale for the runaway accretion of massive atmospheres. However, gas needs to pass through a circum-planetary disc. If the latter has a low viscosity (as expected if planets form in "dead zones"), it might act as a bottleneck for gas accretion.
Aims: We investigate what the minimum accretion rate is for a planet under the limit assumption that the circum-planetary disc is totally inviscid, and the transport of angular momentum occurs solely because of the gravitational perturbations from the star.
Methods: To estimate the accretion rate, we present a steady-state model of an inviscid circum-planetary disc, with vertical gas inflow and external torque from the star. Hydrodynamical simulations of a circum-planetary disc were conducted in 2D, in a planetocentric frame, with the star as an external perturber in order to measure the torque exerted by the star on the disc.
Results: The disc shows a two-armed spiral wave caused by stellar tides, propagating all the way in from the outer edge of the disc towards the planet. The stellar torque is small and corresponds to a doubling time for a Jupiter mass planet of the order of 5 Myr. Given the limit assumptions, this is clearly a lower bound of the real accretion rate.
Conclusions: This result shows that gas accretion onto a giant planet can be regulated by circum-planetary discs. This suggests that the diversity of masses of extra-solar planets may be the result of different viscosities in these discs. 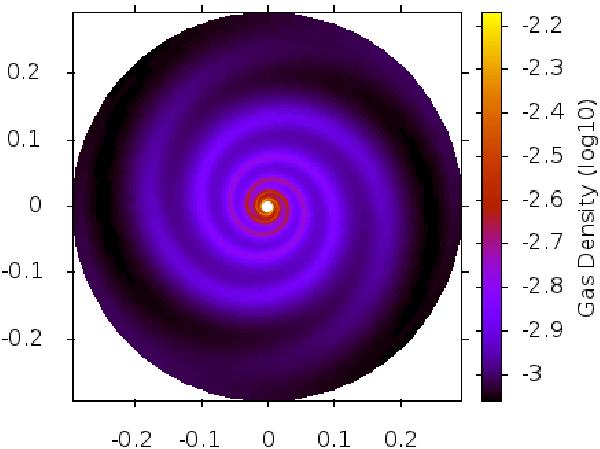