A planetary system with gas giants and super-Earths around the nearby M dwarf GJ 676A. Optimizing data analysis techniques for the detection of multi-planetary systems

Context. Several M dwarfs are targets of systematical monitoring in searches for Doppler signals caused by low-mass exoplanet companions. As a result, an emerging population of high-multiplicity planetary systems around low-mass stars are being detected as well.
Aims: We optimize classic data analysis methods and develop new ones to enhance the sensitivity towards lower amplitude planets in high-multiplicity systems. We apply these methods to the public HARPS observations of GJ 676A, a nearby and relatively quiet M dwarf with one reported gas giant companion.
Methods: We rederived Doppler measurements from public HARPS spectra using the recently developed template matching method (HARPS-TERRA software). We used refined versions of periodograms to assess the presence of additional low-mass companions. We also analysed the same dataset with Bayesian statistics tools and compared the performance of both approaches.
Results: We confirm the already reported massive gas giant candidate and a long period trend in the Doppler measurements. In addition to that, we find very secure evidence in favour of two new candidates in close-in orbits and masses in the super-Earth mass regime. Also, the increased time-span of the observations allows the detection of curvature in the long-period trend. suggesting the presence of a massive outer companion whose nature is still unclear.
Conclusions: Despite the increased sensitivity of our new periodogram tools, we find that Bayesian methods are significantly more sensitive and reliable in the early detection of candidate signals, but more work is needed to quantify their robustness against false positives. While hardware development is important in increasing the Doppler precision, development of data analysis techniques can help to reveal new results from existing data sets with significantly fewer resources. This new system holds the record of minimum-mass range (from Msini ~ 4.5 M ⊕ to 5 Mjup) and period range (from P ~ 3.6 days to more than 10 years). Although all planet candidates are substantially more massive, it is the first exoplanetary system with a general architecture similar to our solar system. GJ 676A can be happily added to the family of high-multiplicity planetary systems around M dwarfs.

Table 6 is available in electronic form at http://www.aanda.org 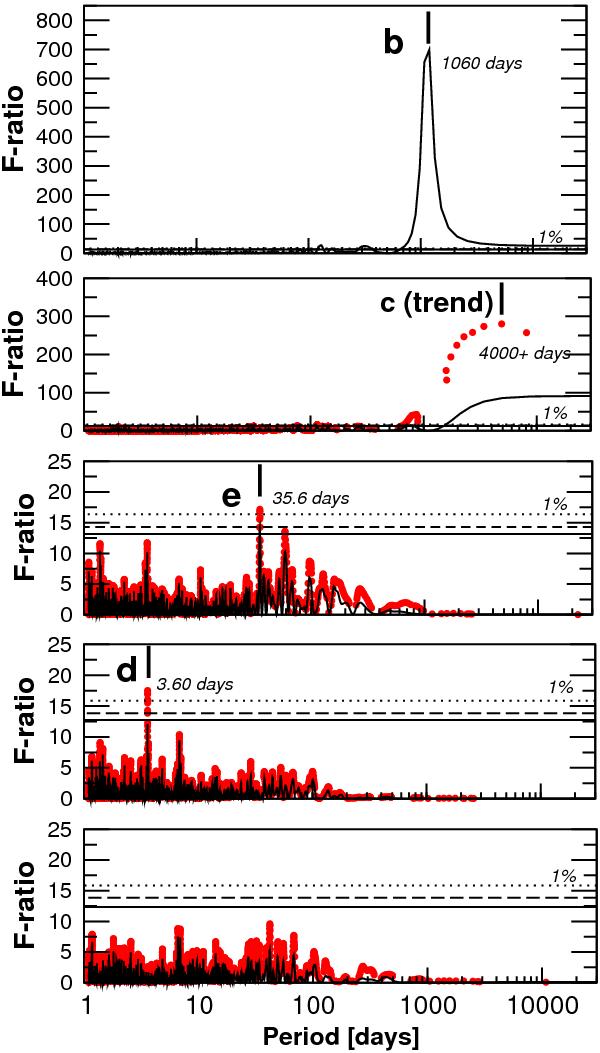