In September 2011, the Herschel Space Observatory performed an observation campaign with the PACS photometer observing the asteroid in the far infrared. The Herschel observations were analysed, together with ESO VLT/VISIR and Spitzer/IRS data, by means of a thermophysical model in order to derive the physical properties of 1999 RQ36. We find the asteroid has an effective diameter in the range 480 to 511 m, a slightly elongated shape with a semi-major axis ratio of a/b = 1.04, a geometric albedo of 0.045+0.015-0.012, and a retrograde rotation with a spin vector between -70 and -90° ecliptic latitude. The thermal emission at wavelengths below 12 μm-originating in the hot sub-solar region- shows that there may be large variations in roughness on the surface along the equatorial zone of 1999 RQ36, but further measurements are required for final proof. We determine that the asteroid has a disk-averaged thermal inertia of Γ = 650 Jm-2 s-0.5 K-1 with a 3-σ confidence range of 350 to 950 Jm-2 s-0.5 K-1, equivalent to what is observed for and suggestive that has a similar surface texture and may also be a rubble-pile in nature. The low albedo indicates that very likely contains primitive volatile-rich material, consistent with its spectral type, and that it is an ideal target for the OSIRIS-REx sample return mission.

Herschel is an ESA space observatory with science instruments provided by European-led Principal Investigator consortia and with important participation from NASA.Analysis is also based on observations collected at the European Southern Observatory, Chile; ESO, No. 287.C-5045(A). 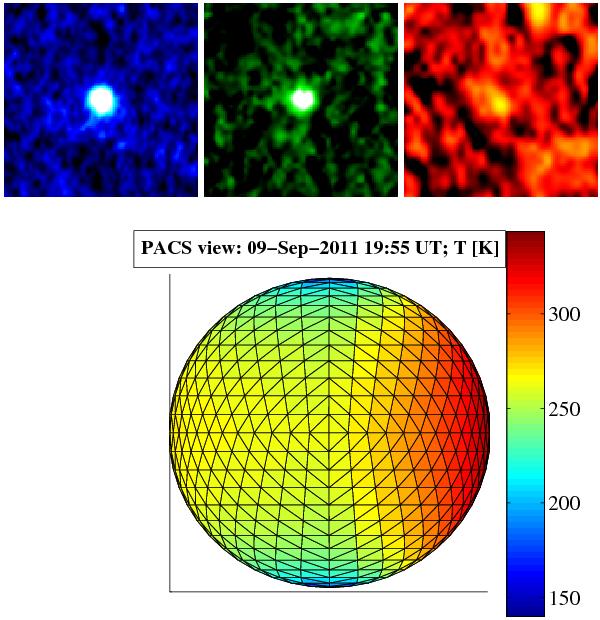