Context. Numerical simulations suggest that Neptune primordial co-orbitals may significantly outnumber the equivalent population hosted by Jupiter, yet the objects remain elusive. Since the first discovery in 2001 just ten minor planets, including nine Trojans and one quasi-satellite, have been positively identified as Neptune co-orbitals. In contrast, Minor Planet Center (MPC) data indicate that more than 5000 objects are confirmed Jupiter co-orbitals. On the other hand, some simulations predict that a negligible fraction of passing bodies are captured into the 1:1 commensurability with Neptune today.
Aims: Hundreds of objects have been discovered in the outer solar system during the various wide-field surveys carried out during the past decade, and many of them have been classified using cuts in the pericentre and other orbital elements. This leads to possible misclassifications of resonant objects. Here, we explore this possibility to uncover neglected Neptune co-orbitals.
Methods: Using numerical analysis techniques, we singled out eleven candidates and used N-body calculations to either confirm or reject their co-orbital nature.
Results: We confirm that four objects previously classified as Centaurs by the MPC currently are temporary Neptune co-orbitals. (148975) 2001 XA255 is the most dynamically unstable of the four. It appears to be a relatively recent (50 kyr) visitor from the scattered disk on its way to the inner solar system. (310071) 2010 KR59 is following a complex horseshoe orbit, (316179) 2010 EN65 is in the process of switching from L4 to L5 Trojan, and 2012 GX17 is a promising L5 Trojan candidate in urgent need of follow-up. The four objects move in highly inclined orbits and have high eccentricities. These dynamically hot objects are not primordial 1:1 librators, but are captured and likely originated from beyond Neptune, having entered the region of the giant planets relatively recently.
Conclusions: Casting doubt over claims by other authors, our results show that Neptune can still efficiently capture co-orbitals for short periods of time and that the cuts in the orbital elements are unreliable criteria to classify objects orbiting in the outer solar system. As in the case of Jupiter Trojans, our results suggests that Neptune's L5 point is less stable than L4, in this case perhaps due to the influence of Pluto.

Tables 2-4 and Figs. 4-6 are available in electronic form at http://www.aanda.org 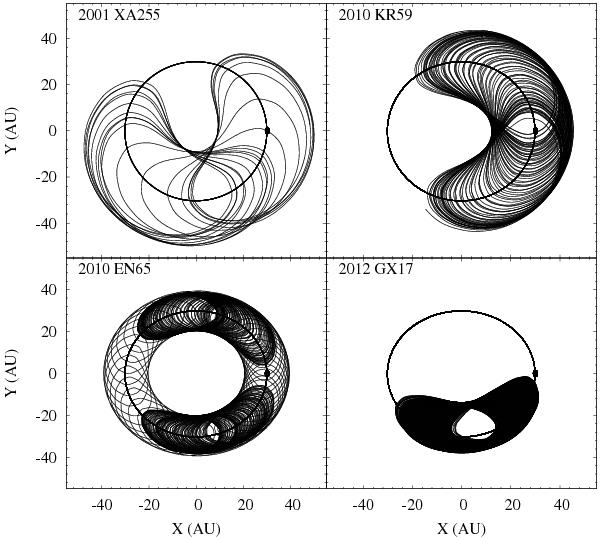