Aims: Our aim is to study deuterium burning in objects forming according to the core accretion scenario in the hot and cold start assumption and what minimum deuterium burning mass limit is found for these objects. We also study how the burning process influences the structure and luminosity of the objects. Furthermore we want to test and verify our results by comparing them to already existing hot start simulations which did not consider, however, the formation process.
Methods: We present a new method to calculate deuterium burning of objects in a self-consistently coupled model of planet formation and evolution. We discuss which theory is used to describe the process of deuterium burning and how it was implemented.
Results: We find that the objects forming according to a hot start scenario behave approximately in the same way as found in previous works of evolutionary calculations, which did not consider the formation. However, for cold start objects one finds that the objects expand during deuterium burning instead of being partially stabilized against contraction. In both cases, hot and cold start, the mass of the solid core has an influence on the minimum mass limit of deuterium burning. The general position of the mass limit, 13 MJ, stays however approximately the same. None of the investigated parameters was able to change this mass limit by more than 0.8 MJ. Due to deuterium burning, the luminosity of hot and cold start objects becomes comparable after ~200 Myr. 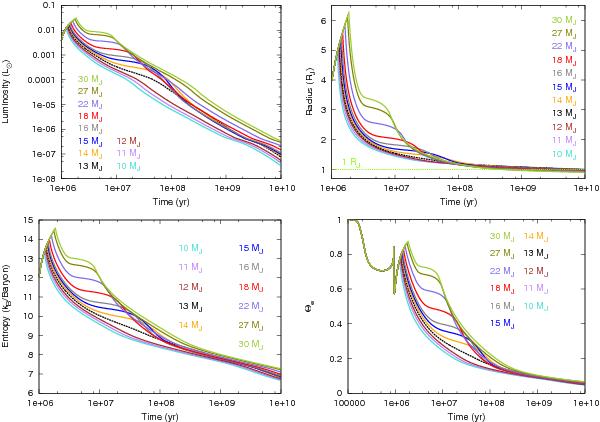