Context. In recent years, many low-mass (≲ 0.45 M⊙) white dwarf stars expected to harbor He cores have been detected in the field of the Milky Way and in several galactic globular and open clusters. Until recently, no objects of this kind showed pulsations. This situation has changed recently with the exciting discovery of SDSS J184037.78+642312.3, the first pulsating low-mass white dwarf star.
Aims: Motivated by this extremely important finding, and in view of the very valuable asteroseismological potential of these objects, we present here a detailed pulsational study applied to low-mass He-core white dwarfs with masses ranging from 0.17 to 0.46 M⊙, based on full evolutionary models representative of these objects. This study is aimed to provide a theoretical basis from which to interpret future observations of variable low-mass white dwarfs.
Methods: The background stellar models on which our pulsational analysis was carried out were derived by taking into account the complete evolutionary history of the progenitor stars, with special emphasis on the diffusion processes acting during the white dwarf cooling phase. We computed nonradial g-modes to assess the dependence of the pulsational properties of these objects with stellar parameters such as the stellar mass and the effective temperature, and also with element diffusion processes. We also performed a g- and p-mode pulsational stability analysis on our models and found well-defined blue edges of the instability domain, where these stars should start to exhibit pulsations.
Results: We found substantial differences in the seismic properties of white dwarfs with M∗ ≳ 0.20 M⊙ and the extremely low-mass (ELM) white dwarfs (M∗ ≲ 0.20 M⊙). Specifically, g-mode pulsation modes in ELM white dwarfs mainly probe the core regions and are not dramatically affected by mode-trapping effects by the He/H interface, whereas the opposite is true for more massive He-core white dwarfs. We found that element diffusion processes substantially affects the shape of the He/H chemical transition region, leading to non-negligible changes in the period spectrum of low-mass white dwarfs, in particular in the range of stellar masses characteristic of ELM objects. Finally, our stability analysis successfully predicts the pulsations of the only known variable low-mass white dwarf (SDSS J184037.78+642312.3) at the right effective temperature, stellar mass and range of periods.
Conclusions: Our computations predict both g- and p-mode pulsational instabilities in a significant number of known low-mass and ELM white dwarfs. It is worth observing these stars in order to discover if they pulsate. 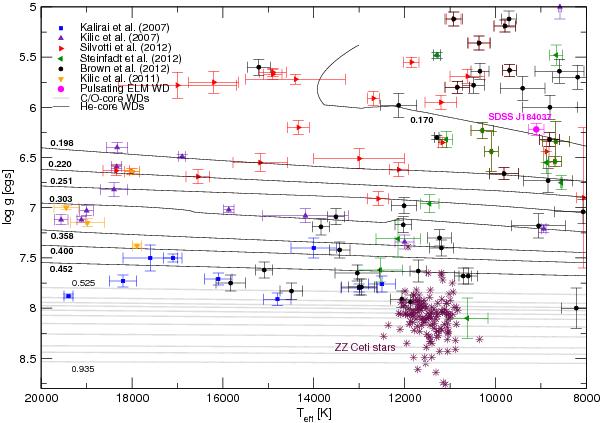