Context. Within the cosmological concordance model, cold dark matter (CDM) subhalos form the building blocks that merge hierarchically into more massive galaxies. This concept requires that massive galaxies are even nowadays surrounded by numerous subhalos. Since intergalactic gas is accreted by massive galaxies, observable e.g. as high-velocity clouds (HVCs) around the Milky Way, with extremely low metallicities, these can represent the baryonic content of primordial dark matter (DM) subhalos. Another possibility of their origin is that they stem from disrupted satellite galaxies, but in this case, these gas clouds move unaccompanied by a bound DM structure.
Aims: HVCs are mainly observed at significant distances from the galactic disk, while those closer to the disk have lower infall speed on average and larger but not yet solar element abundances. This can be caused by interactions with the hot halo gas: decelerated by ram pressure and metal-enriched by the more abundant gas in the galactic halo. Since HVCs are observed with long gas tails and with irregular substructures, numerical models of gas clouds passing through hot halo gas are performed to explore their structure and compare them with observations. If HVCs are engulfed by DM subhalos, their gas must leave the DM gravitational potential and reflect this in their dynamics. On the other hand, the evolution and survival of pure gas models must be tested to distinguish between DM-dominated and DM-free clouds and to draw conclusions about their origins.
Methods: A series of high-resolution hydrodynamical simulations using the adaptive-mesh refinement code FLASH V3.2 were performed for typical HVC masses, distances, and infall velocities.
Results: The models demonstrate that purely baryonic HVCs with low masses are disrupted by ram-pressure stripping and Kelvin-Helmholtz instabilities, while more massive ones survive, losing their initially spherical shape, developing significant substructures including cometary elongations in the column density distribution ("head-tail structure"). In contrast, HVCs with DM subhalos survive with more than 90% of their gas mass still bound and spherically shaped, approaching like bullets the Galactic disk. In addition, we find that velocity gradients along the cometary head-tail structures does not necessarily offer a possibility of distinguishing between DM-dominated and purely gaseous HVCs. Comparison of models with observations let us conclude that HVCs are not embedded in a DM substructure and do not trace the cosmological subhalo population. 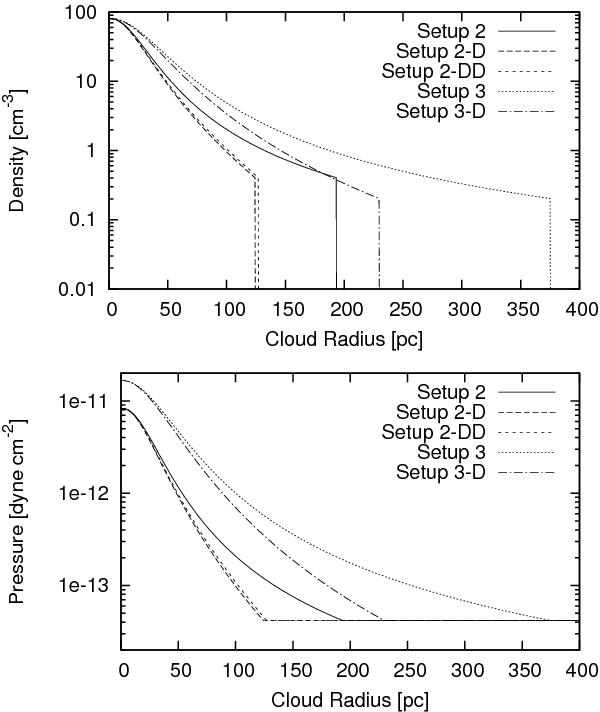