Context. It has long been suggested that circumstellar disks surrounding young stars may be the signposts of planets, and even more so since the recent discoveries of embedded substellar companions. According to models, the planet-disk interaction may create large structures, gaps, rings, or spirals in the disk. In that sense, the Herbig star HD 142527 is particularly compelling, as its massive disk displays intriguing asymmetries that suggest the existence of a dynamical peturber of unknown nature.
Aims: Our goal was to obtain deep thermal images of the close circumstellar environment of HD 142527 to re-image the reported close-in structures (cavity, spiral arms) of the disk and to search for stellar and substellar companions that could be connected to their presence.
Methods: We obtained high-contrast images with the NaCo adaptive optics system at the Very Large Telescope in L'-band. We applied different analysis strategies using both classical PSF-subtraction and angular differential imaging to probe for any extended structures or point-like sources.
Results: The circumstellar environment of HD 142527 is revealed at an unprecedented spatial resolution down to the subarcsecond level for the first time at 3.8 μm. Our images reveal important radial and azimuthal asymmetries that invalidate an elliptical shape for the disk. It instead suggests a bright inhomogeneous spiral arm plus various fainter spiral arms. We also confirm an inner cavity down to 30 AU and two important dips at position angles of 0 and 135 deg. The detection performance in angular differential imaging enables exploration of the planetary mass regime for projected physical separations as close as 40 AU. Use of our detection map together with Monte Carlo simulations sets stringent constraints on the presence of planetary mass, brown dwarf or stellar companions as a function of the semi-major axis. They severely limit any presence of massive giant planets with semi-major axis beyond 50 AU, i.e. probably within the large disk's cavity which extends radially up to 145 AU or even farther outside.

Based on observations collected at the European Organization for Astronomical Research in the Southern Hemisphere, Chile, ESO: run 087.C-0299A.Reduced images are only available at the CDS via anonymous ftp to cdsarc.u-strasbg.fr (130.79.128.5) or via http://cdsarc.u-strasbg.fr/viz-bin/qcat?J/A+A/546/A24 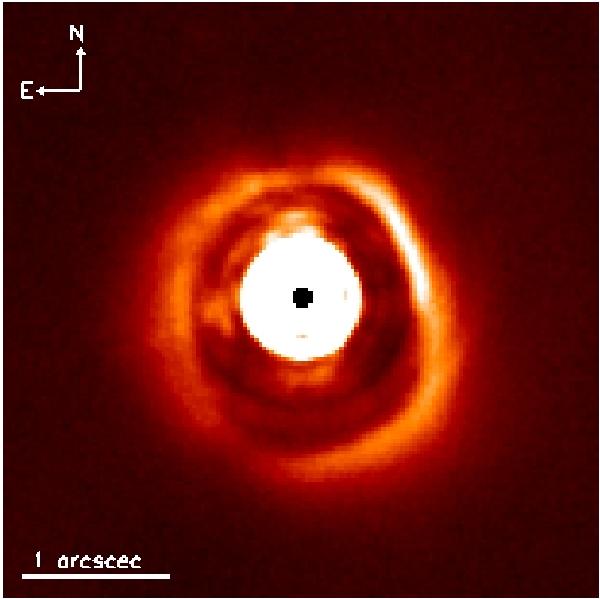