Context. Upon discovery, asteroid (309239) 2007 RW10 was considered a Neptune Trojan candidate. The object is currently listed by the Minor Planet Center as a Centaur but it is classified as a scattered disk or trans-Neptunian object by others. Now that its arc-length is 8154 d and has been observed for more than 20 yr, a more robust classification should be possible.
Aims: Here we explore the orbital behaviour of this object in order to reveal its current dynamical status.
Methods: We perform N-body simulations in both directions of time to investigate the evolution of its orbital elements. In particular, we study the librational properties of the mean longitude.
Results: Its mean longitude currently librates around the value of the mean longitude of Neptune with an amplitude of nearly 50° and a period of about 7.5 kyr. Our calculations show that it has been in its present dynamical state for about 12.5 kyr and it will stay there for another 12.5 kyr. Therefore, its current state is relatively short-lived. Due to its chaotic behaviour, the object may have remained in the 1:1 mean motion resonance with Neptune for several 100 kyr at most, undergoing transitions between the various resonant states.
Conclusions: (309239) 2007 RW10 is currently a quasi-satellite, the first object of this dynamical class to be discovered around Neptune. With a diameter of about 250 km, it is the largest known co-orbital in the solar system. Although it is not a Centaur now, it may become one in the future as it appears to move in an unstable region. Its significant eccentricity (0.30) and inclination (36°), strongly suggest that it did not form in situ but was captured, likely from beyond Neptune. With an apparent magnitude of 21.1 at opposition (October), it is well suited for spectroscopic observations that may provide information on its composition and hence eventually its origin. 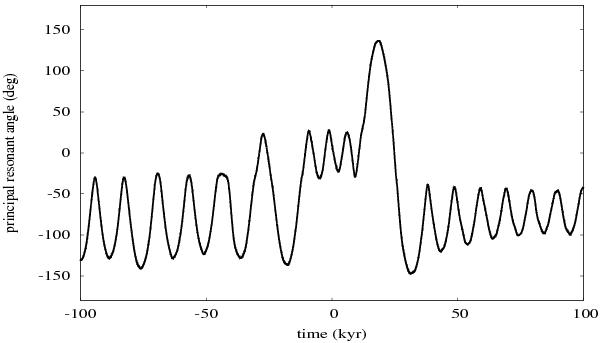