Context. Surface abundances of OB stars provide important information on mixing processes in stellar interiors and on evolutionary status. Performing abundance determination from selected C, N and O lines in the optical spectra of OB stars is thus necessary to understand the evolution of massive stars.
Aims: In this study, we investigate the formation of C iii 4647-51-50 and C iii 5696 in the atmosphere of O stars to see if they can be reliably used for abundance determinations.
Methods: We used atmosphere models computed with the code CMFGEN. The key physical ingredients explaining the formation of the C iii lines were extracted from comparisons of models with different stellar parameters and through examining rates controlling the level populations.
Results: The strength of C iii 5696 critically depends on UV C iii lines at 386, 574 and 884 Å. These lines control the C iii 5696 upper and lower level population. C iii 884 plays a key role in late O stars where it drains the lower level of C iii 5696. C iii 386 and C iii 574 are more important at early spectral types. The overlap of these UV lines with Fe iv 386.262, Fe iv 574.232 and S v 884.531 influences the radiative transfer at 386, 574 and 884 Å, and consequently affects the strength of C iii 5696. C iii 4650 is mainly controlled by the C iii 538 line, which acts as a drain on its lower level. Fe iv 538.057 interacts with C iii 538 and has an impact on the C iii 4650 profile. Low temperature dielectronic recombinations have a negligible effect on the line profiles. The main effect of the wind on the C iii lines is an increase of the emission as mass loss rate increases, due to a shift of the formation region toward high velocity. Such a shift also implies desaturation of C iii 386, C iii 538, C iii 574 and C iii 884, which in turn modify the C iii 4650 and C iii 5696 line profiles. Metallicity effects are complex and result from an interplay between ionization, metallic line interaction with UV C iii lines, and wind effects.
Conclusions: Given our current understanding of the stellar and wind properties of O stars, and in view of the present results, the determination of accurate carbon abundances from C iii 4647-51-50 and C iii 5696 is an extremely challenging task. Uncertainties lower than a factor of two on C/H determinations based only on these two sets of lines should be regarder as highly doubtful. Our results provide a possible explanation of the variability of C iii 4650 in Of?p stars. 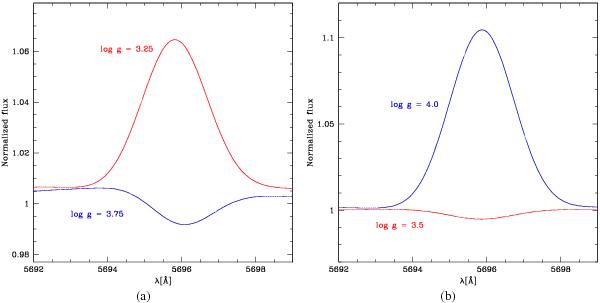